Paintings & Drawings. Colorful geometric constellations constructed using a compass that in turn give way, collages made of painted aluminum, and early oeuvre dedicated to the so-called working drawings, ostensibly casual drafts on pieces of notepaper or stationery. 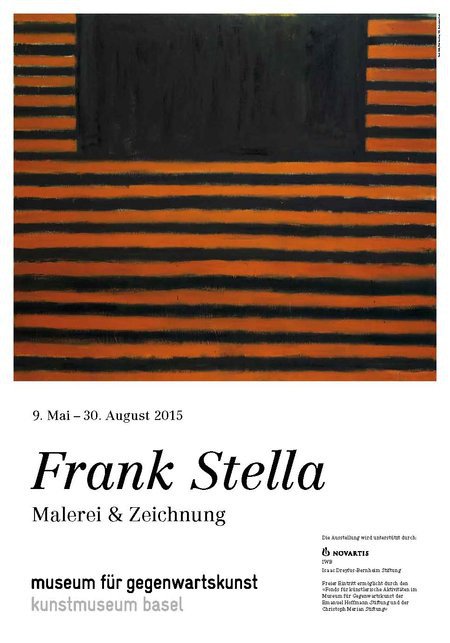 From May 9 until August 30, 2015, the Kunstmuseum Basel presents works by the American artist Frank Stella. Hosted by the Museum für Gegenwartskunst, the exhibition Frank Stella – Paintings & Drawings primarily features selections from the museum’s own exceptionally rich holdings of Stella’s art. It is curated by Anita Haldemann, curator and interim head of the Kunstmuseum Basel’s Kupferstichkabinett (Department of Prints and Drawings). The exhibition will be inaugurated with an opening at the Museum für Gegenwartskunst on May 8, 2015, at 6:30 pm. The Kunstmuseum Basel’s main building remains closed for renovations and construction work until mid-April 2016.

In 1958, the American painter Frank Stella, then barely over twenty years old, conceives his striped paintings, taking abstraction in art to a new level of radicalism. A year later, his stripe paintings in black cause a sensation in New York. Stella not only reduces the palette to a minimum, he also eschews any hint of spatial depth and undoes the distinction between figure and ground. His art avoids any illusionism and emphasizes the flatness of the canvas and its object-like qualities. In 1960, Stella starts to turn his paintings into geometric objects in earnest, painting stripes on U- or V-shaped canvases; his palette remains very restrained. Over the ten years that follow, these spectacular shaped canvases with their minimalism evolve into colorful geometric constellations constructed using a compass that in turn give way, in the 1970s, to collages in space made of painted aluminum.

The second part of our exhibition exploring Frank Stella’s early oeuvre is dedicated to the so-called working drawings, ostensibly casual drafts on pieces of notepaper or stationery. Spontaneous sketches visualize nascent pictorial ideas he elaborates in several different versions. Lists of potential titles appear next to schematic layouts that note the paints to be used in the realization on the canvas. The drawings thus offer illuminating insight into Stella’s creative method.