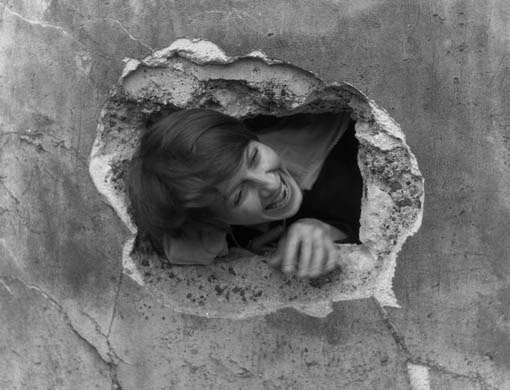 The Museum commemorates the artist Eva Aeppli, who passed away on May 4, 2015, with a presentation of works and photos. Aeppli, who grew up in Basel, created from the 1950s an oeuvre that is characterized by great intensity, and in which she traced the depths of the human psyche. Her creations are charcoal drawings, large-format paintings, fabric figures, and bronze heads, along with joint sculptures with Jean Tinguely, with whom she went to Paris in 1952 and to whom she was married until 1961. Aeppli resided from the 1950s onward in France, ultimately in Honfleur (Normandy), where she passed away shortly after her 90th birthday. Museum Tinguely is showing, two large-format paintings, a group of fabric figures, nine bronze heads, and numerous photographs by the artist. Eva Aeppli, born on May 2, 1925 in Zofingen (Switzerland), grew up in Basel with her parents and three siblings. She attended the Steiner School in Basel, which had been co-founded by her father. During the 2nd World War she enrolled in courses at the School of Applied Arts and created her first fabric figures, glove puppets which she sold in various stores. She only commenced her actual artistic oeuvre - she considered the glove puppets her bread-and-butter work - once she was in Paris.