AB Blood Type. A new sculptural installation: the entire wall surfaces of the exhibition halls have been painted yellow, a certain hue in the public sphere used as a forewarning or alert. 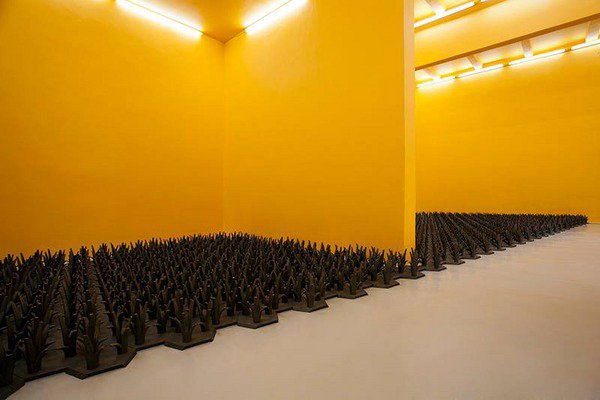 The entire wall surfaces of the exhibition halls have been painted yellow, a certain hue in the public sphere used as a forewarning or alert. A new sculptural installation will be making its first appearance in China - a major site-specific installation. Within this environment, the installation appears as a field of iron cast pieces of grass, spanning across, and unifying the gallery’s two exhibition rooms. Forming one variable unit of a vast intersecting installation, three singular blades of grass protrude from a hexagonal base – this unit is replicated exponentially in a tessellated formation to fill a given space. Although simple in form and individually miniscule, the durability of grass lays in a persistent ability to accrue en-masse even in barren swathes of land. With this iteration, iron supersedes its organic form, thereby augmenting the sculpture whilst also subjecting it to rust through the course of time.

Hanging from the ceiling above, a grouping of interlinked stainless steel coat hangers have been reproduced hand-made and suspended together – both works have been placed together to allude to the humble non-descript features of quotidian everyday life. From facsimiles of the humble coat hanger to the small blades of an innocuous plant form, these fragile objects are galvanised by virtuoso displays of technical craftsmanship. It is an approach undertaken with an irreverent, often inordinate attitude, and underscored by a profound joy in puns and double-entendres.

As artist, writer, publisher, and architect, the proflicacy of Ai Weiwei’s multifarious practice stretches far and beyond the confines of his studio based in Caochangdi (‘grassy field’ in Chinese). From San Francisco’s famed Alcatraz Island to his participation at the 2013 Venice Biennale, as a leading chronicler of our times, he has also participated in major solo exhibitions including: Martin Gropius Bau (2014), Indianapolis Museum of Art (2013), Hirshhorn Museum and Sculpture Garden, Washington D.C. (2012), Taipei Fine Arts Museum, Taiwan (2011), Tate Modern, London (2010) and Haus der Kunst, Munich (2009). Architectural collaborations include the 2012 Serpentine Pavilion and the 2008 Beijing Olympic Stadium, with Herzog and de Meuron.