The last segment of a 3 part program under the general title "Old Intersections-Make it New III". With some projects and a parallel programme, the main exhibitions are: "Between the Pessimism of the Intellect and the Optimism of the Will" with 45 artists from 25 countries all around the world. "Earth's enduring gifts" the Greek biodiversity from ancient times until today, "Kazimir Malevich and his students. 100 years after the Black Square", and "Ident-alter-ity" on the issue of gender and self-determination. 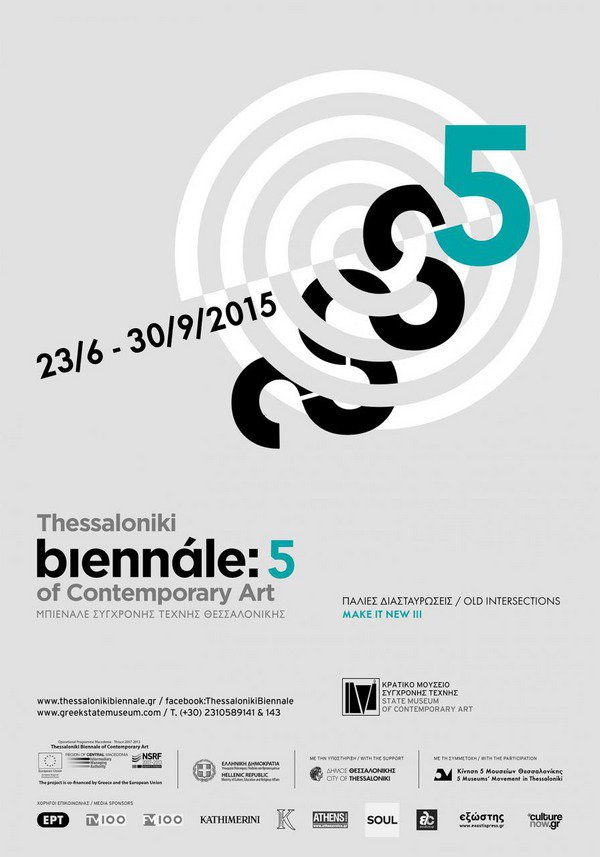 The Mediterranean region lies at the core of the main and parallel programme of the forthcoming 5th Thessaloniki Biennale of Contemporary Art, which will be held from June 23 until September 30, 2015, in Thessaloniki, as the last segment of a three part program which began in 2011, under the general title “Old Intersections-Make it New”.
The 5th Thessaloniki Biennale of Contemporary Art is funded by the Operational Program Macedonia-Thrace 2007-2013, co-financed by the European Union (European Regional Development Fund) and Greece, it is administered and organized by the State Museum of Contemporary Art, Thessaloniki. General Director of the Biennale is Katerina Koskina.
The Biennale will be inaugurated on Tuesday, June 23, 2015, at 20:00, at the Pavilion 6 (Leof Stratou & 3rd Septemvriou St, TIF-HELEXPO premises).

“Between the Pessimism of the Intellect and the Optimism of the Will”
44 artists and one artists’ collective group from 25 countries all around the world, will exhibit their artworks, including existing works as well as several new productions commissioned for the occasion by the Biennale.

B) EXHIBITIONS (in chronological order)

“Earth’s enduring gifts”
The exhibition examines the timeless gifts of the Greek biodiversity from ancient times until today. The connection between man and nature throughout Greece are presented through the artistic creations and the eating habits of the people, who lived on the Greek mainland and the Aegean, and are displayed by historical examples deriving from ancient Macedonia and prehistoric Thera, in order to reach the modern scientific research on Greek biodiversity and its prospects.

“Kazimir Malevich and his students. 100 years after the Black Square. Russian avant garde works from the Costakis collection of the SMCA”
Taking as its point of departure the 100th anniversary of the creation of Kazimir Malevich’s “Black Square”, the most emblematic artwork in the history of the Russian avant garde movement, and the appearance of Suprematism, the State Museum of Contemporary Art exhibits artworks and archival material from the Costakis collection, which refer to the historic "Last Futurist Exhibition 0,10", Suprematism itself, Malevich’s students and the educational role of the artist.

“HEL(L)AS! Everywhere!”
Exhibition of works by Konstantinos Xenakis in a “silent dialogue” with the antiquities in the Archaeological Museum of Thessaloniki.

"Travelling in the Eastern Mediterranean through the Digital Archive of Greek Culture of Th. Korres (A.U.TH.)"
This temporary -and travelling- photographic exhibition aims to show to the public a series of more or less known places (archaeological sites, settlements, landscapes e.a.) with a strong Greek presence over time. Common characteristic of all these places is their position along the littoral zone of Eastern Mediterranean (Asia Minor, Jordan, Sinai Peninsula, Egypt).

“Relative Motions / Evangelia Kranioti - Julien Prévieux”
This exhibition explores the living aspects of tradition and their redevelopment into modern art. Such distinctive approaches, like the ones in the works of E.Kranioti (GR) and J.Previeux (FR), do face the challenges and the reality of the modern era, using contemporary mediums. Yet, they manage not to be cut off from the Mediterranean tradition, giving it special emotions and dynamics.

C) OTHER PROJECTS (in chronological order)

Love Difference Table / Michelangelo Pistoletto
This emblematic work and “manifest” by Michelangelo Pistoletto will host all the theoretical projects and events of the Biennale. It will also serve as a mirror, reflecting the events, fermentations and outcomes of the Biennale’s three-day programme about the Mediterranean under the general title “Old Intersections – Make it New”.

5th Young Artists’ Workshop, "Romance"
The Young artists’ Workshop will focus on an alternative approach to the central concept and main theoretical background of this year's event, based on "Letters from Prison" by Antonio Gramsci.

The Thessaloniki Biennale hosts every two years parallel exhibitions and events that take place in the city, during its duration.