Everything but the kitchen sank. His still lifes are governed by a singular, uncanny logic-they exceed human vanity to achieve a buoyant life for objects. The exhibition is comprised of two parts-both above and below the water. 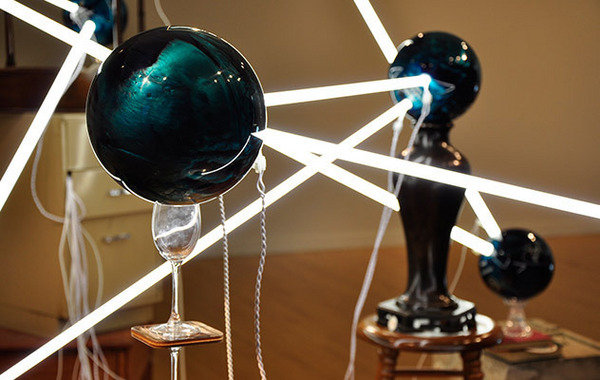 Apples sink, yet the pear floats. Unmoored by gravity, and saturated with life, a deck of cards performs an impossible coup, ascending beyond the frame. Alejandro Almanza Pereda’s still lifes are governed by a singular, uncanny logic—they exceed human vanity to achieve a buoyant life for objects.

Almanza’s exhibition in the Walter and McBean Galleries is comprised of two parts—both above and below the water. In July and August, the gallery will function as an active studio, and scuba tank, for experimentation and the production of new work. In September, and for the duration of the exhibition, the resulting photographs and video will be presented.

Meanwhile, in SFAI’s Diego Rivera Gallery, we have been looking at Diego Rivera’s ass for 84 years. Of course, this was the artist’s intention. Rivera’s iconic work The Making of a Fresco Showing the Building of a City (1931) offers an epic image of the reconstruction of San Francisco, depicting laborers and fresco painters alongside the patron, on the scaffold, and closest to our eye: the artist’s high-waisted rear.

For Almanza, Rivera is a catalyst for the ongoing instrumentalization of Latin American identity and artistic practice. The curious history of Rivera’s SFAI fresco and its magnetism for tourists has long spurred interventions by artists. Throughout the 1950s and 60s, it was curtained off, and a provisional wall was constructed to obscure—it’s not known exactly what—yet it was perhaps a moment in which the tyrannies of McCarthyism and Abstract Expressionism entwined.

More recently, a toothpaste hammer and sickle was applied, Rigo 90 offered his own rebuttal, and Banana Republic supported the fresco’s restoration. From Almanza’s perspective, if Rivera is a limiting screen through which we understand Latin American art, this is an opportunity to add a new screen. Almanza’s scaffold of fluorescent fixtures doubles the structure of the fresco, shifts Rivera to the middle ground, and troubles the light sensor of the tourist’s camera. Beyond this light frame, another narrative of historical imbalance, artistic legacy, and the imperious Rivera achieves focus.

Everything but the kitchen sank is organized by San Francisco Art Institute and curated by Hesse McGraw, Vice President for Exhibitions and Public Programs.

Almanza is the 2015 recipient of The Harker Award for Interdisciplinary Studies, which supports artists-in-residence at San Francisco Art Institute. The Harker Award was established through a generous bequest by artist and SFAI faculty member Ann Chamberlain and is administered by the San Francisco Foundation. The works for Everything but the kitchen sank were produced during Almanza’s 2015 residency at SFAI.

ABOUT THE ARTIST
Alejandro Almanza Pereda produces sculptures, photos, videos, public works, and installations that highlight our emotional relationships with objects through works that appear unstable, immaterial, or on the cusp of disaster. Born in Mexico in 1977, Almanza received his MFA from Hunter College in New York. He has presented solo shows at Museo Experimental El Eco, Mexico City; College of Wooster Art Museum, Ohio; and Art in General, New York. Almanza’s work can be found in international collections including the Arizona State University Art Museum; the Goetz Collection, Munich; El Museo del Barrio, New York; Colección Júmex, Mexico City; and Museo de Arte de Lima. He is a member of La Rubia te Besa, an art band project, and lives and works in Mexico City.

Sponsors
SFAI's exhibitions and public programs are made possible by the generosity of donors and sponsors. Major support is provided by Grants for the Arts.

Support for Everything but the kitchen sank is provided by the Harker Fund of The San Francisco Foundation.

Symposium reception: "What Can Exhibitions Do?"
Saturday, June 20, 5pm

Graduate lecture series: "To Talk the Talk and to Talk the Walk"
Friday, June 26, 6:30pm