Fictitious Tales about the History of Earth

The exhibition brings together a former MAK Center Resident and a Los Angeles-based practitioner. Filmmaker James Benning joins Nicole Six & Paul Petritsch in considering the different approaches to the construction of narrative. 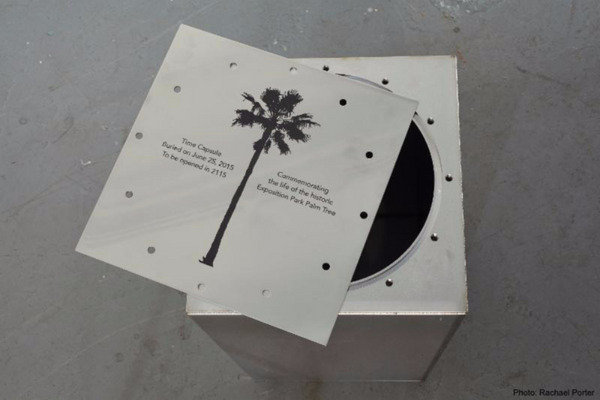 “Watch Paleontology in action,” claims the Page Museum, an institution located at the La Brea Tar Pits in Los Angeles. If, as they claim when advertising their expansive collection of fossils, only “the best are on display” what has happened to the others? Where are the fossils that are simply good?

In his most recent film natural history, James Benning directs his concentrated attention toward precisely these objects which are hidden from the regular visitors of a museum. Shot at the Museum of Natural History in Vienna in 2014, the film displays administrative offices, service corridors, cabinets filled with objects, and a storage depot that is located three floors below the palatial galleries of a building which signifies Vienna’s imperial past. Opened in 1889, the museum’s collection dates back to Empress Maria Theresia’s husband Franz Stephan, who was an avid collector of fossils, minerals, shells, and snails. Today it houses the world’s largest and oldest public collection of meteorites, even including one from Mars. In his text about the artwork, Benning has put together some of this history in a timeline which is available on the museum’s website. As in some of his earlier films, Benning assembles historic data, combining it with personal, autobiographic information and sometimes even adding fictitious dates thereby appropriating and inscribing himself into history. natural history, 77 minutes of tightly framed shots, follows the mathematic concept of pi, specifically its first 27 digits. When compared to other films of his this creates a less evident rhythmic structure, directing the gaze toward those images that almost only occur as flickers in between the longer shots: a baroque portrait of the royal husband, deerskin sorted according to color and origin, contemporary library cabinets, snakes stored in formaldehyde, a mass of antlers hanging and left to dry in one of the depot’s corridors.

Although a site with naturally occurring phenomena, the La Brea Tar Pits are nevertheless an established brand. On its website, this institution offers an interactive timeline where guests are encouraged to explore prehistoric Los Angeles. Interestingly, this timeline doesn’t attempt to project the earth’s history into the future; it’s as if fossils or found objects in general don’t have a life after being exhibited. On the grounds of the Page Museum fossils are still discovered however, the process then displayed as a real-time spectacle. The excavation site tells a typical L.A. story: ranchers, oil, privatization, tentative public use, and a philanthropist who donates a museum. A black and white aerial photograph featured on the Los Angeles Conservancy’s website shows the site in 1934 when Rancho La Brea consisted of a single ranch on a large plot of land, framed by a gallery of trees and pedestrian walkways lined with parked cars. Cutting through the image from the upper right to the lower left corner, Wilshire Boulevard divides the undeveloped farmland in the north from the already established grid to the south, where houses begin to populate the edges of each plot.

Rendered in color, a separate aerial photograph of farmland shows an open pasture with groups of cows grazing. The grass has been visibly ingested, interspersed with occasional patches of outgrowth. The left side of the image is framed by woods, contrasted by traces of agricultural production at the edges of the pasture. In the center of the image, a meandering path has been cut out of the grass, leaving an almost painterly stain behind. Taken in 2014, this picture is the only documentation of Nicole Six’s and Paul Petritsch’s work The Sea of Tranquility.

With this intervention Six & Petritsch transferred the first human traces in space, left on the moon by the Apollo 11 astronauts in 1969, back to where they originated: earth. Recreated on a plot of remote farmland in Austria to their exact dimensions, the literalness of Neil Armstrong’s “small steps” is evident as they apparently only covered a distance of 50 x 70 meters (approximately 164 ft. x 229 ft. 7 in.). Based on this, is it absurd to speculate about the “carbon footprint” of the first actual footprints on the moon? Are they evidence of a historic event or part of a grand narrative of conspiracy at the end of the 20th century? Forty-five years after the occurrence of the first moonwalk, no other presence has yet disrupted these traces. But it was not these bodily imprints of the astronauts that changed the earth’s relationship to its surroundings, rather the gaze from and to the earth and its manifestation in photographs that have helped to re-invent the earth as a “blue marble” or “blue dot”. Numerous fictions (some as early as Kepler’s Somnium, published in 1609) and phantasms about life on the moon and its possible colonization by humans, have shown the age-old obsession by those stuck living on earth. The sustainability of the traces of human activity left behind on the moon is a signifier pointing precisely to these obsessions. Although being equally immersed in this obsession, Six & Petritsch, as in most of their artworks, explore the disappearance of the traces’ earthly counterparts: in the not so distant future the grass will overtake their marking of the land, the remaining evidence of their performance being only a photograph and its surrounding story.

Situated only two blocks south of the former Rancho La Brea site are the Mackey Apartments. Designed by Viennese-born architect Rudolph Schindler and finished in 1939, they tell a story about various lines of migration which occurred throughout the 20th century. It is here at the installation in the Garage Top where lines of transposition between artists, site, and time overlap, morphing into an experience of duration. When the rather static images of Benning’s film installation are confronted by the performative score of Six & Petritsch’s re-staging of the Apollo 11 moonwalk, the gaze is tied back to the body. And even though the conceptual rigidity of both works is similar, they not only represent but produce different types of gazes. While natural history is clearly that of a filmmaker whose body, although absent from the frame, is felt behind the camera, Six & Petritsch’s aerial shot delegates the human gaze to a more mechanic, machine-like view in which the apparatus is foregrounded. Upon taking the score to perform the footprints in and around the Mackey Apartments, another displacement and timeline has the potential to begin. Its performers, the visitors, are prompted to rethink the relation between site, place and space, the construction of history as well as the possibility of contributing to a future site of excavation.

In order to expand the cultural exchange at the core of the Artists and Architects-in-Residence program, The Austrian Federal Chancellery and the MAK Center invite Austrian and Vienna-based alumni residents to collaborate with L.A. artists and architects of their choosing at the Garage Top at the Mackey Apartments for the Garage Exchange Vienna-Los Angeles exhibition series.