National Heritage of the Republic of Poland

Featuring international artists the exhibition seeks to promote an expanded conversation about climate change and environmental awareness. Educational and aesthetically inventive, the exhibition consists of non-physical artworks such as performance, video, games & music. 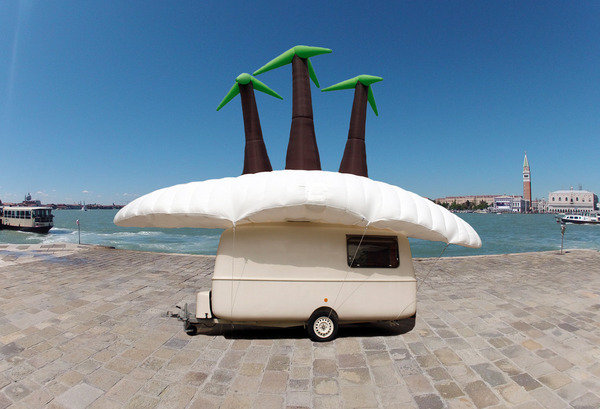 Søren Dahlgaard developed the project in response to the environmental and political plight on the Maldives. As one of the world's most low-lying atoll archipelagos, the Maldives faces an existential threat because of the rising sea levels caused by the climate change. Politically, the Maldives has also struggled for many years under dictatorship, up until a brief period of democracy under the presidency of well-known climate and political activist Mohamed Nasheed from 2008–12.

Any climate change conversation obviously needs to factor the people into the equation. This means giving voices to those people who need to be heard and making sure climate change responses (adaptation and mitigation) are mindful of the aspirations of the community. In short, climate change and democracy are intricately interconnected.

In 2012 the Maldives' first democracy was brought to an end when forces aligned with the former regime forced Nasheed to resign under duress. Since then, anti-democratic forces have managed to consolidate various organs of state and have subsequently jailed Nasheed on bogus charges of terrorism. Many other leaders of the democracy movement have been jailed, journalists are threatened on a regular basis and police brutality has become the norm. Nasheed plays a crucial part of the exhibition contributing with a text on climate justice and staring in the documentary movie The Island President (2011) directed by Jon Shenk.

The word Exodus in the title refers both to the climate change issues the Maldives faces, which could potentially turn the entire Maldivian population into climate refugees and also on the exodus of democracy, human rights, institutional transparency, independent courts and corruption control.

The caravan symbolises both a sense of belonging as well as mobility. For most of us, the land we are born in and have lived on all our lives is home. Yet for Maldivians (and many other climate-affected nations) this sense of lives anchored to a fixed home may soon cease to be a reality as their islands disappear under the waves. Home for the future climate-refugees of the world may be a mobile place, anchored to nowhere in particular. There is that ever-growing possibility of flight, of exodus—of home being a place anchored only by captured sounds, images, memories and artefacts and not solid fixed ground.

The Maldives Exodus Caravan Show serves as a platform for art as a tool for environmental, social and political change with special focus on the Free Nasheed campaign.

Project realized within the framework of the The Outdoor Gallery of the City of Gdansk—a long-term, international project realized by Laznia CCA aiming to create a permanent collection of works of art in public space in the neglected districts of Gdansk. Projects are chosen by a jury in closed, international competitions. Each year Laznia CCA invites also artists to create temporary interventions and perform artistic actions that are complementary to the permanent competition pieces and realizes educational programme.