Does Yellow Run Forever? Graham's most recent project presents a delicate and lyrical meditation of the sort often deemed beyond the purview of the photographic medium. 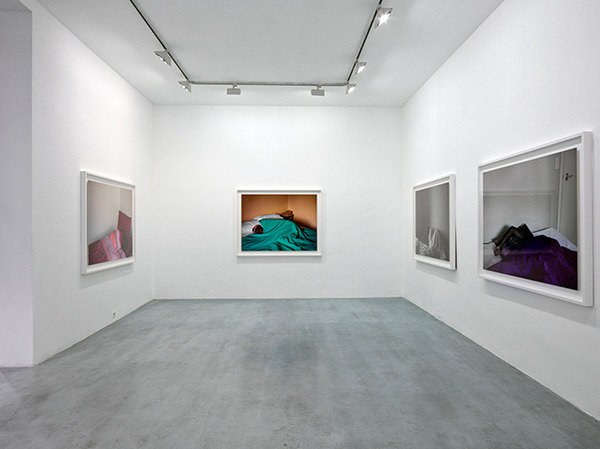 “In the gloom, the gold gathers the light against it”.
Cantos, Ezra Pound

Does Yellow Run Forever? The question appears grammatically sound, and yet at the same time it is nonsensical. Try to grasp it semantically and its meaning slips away; take it simply for what it is and you find yourself in the presence of a thought tha t is poetical as it is plain tive. As a question per se it does not quite work, it yet nonetheless it ‘works’ in that, like a koan, it belongs to a realm of questioning where concrete ‘answers’ may, in fact, be no answer at all. With this evocative phrase 1 as its title, Paul Graham’s most recent project presents a delicate and lyrical meditation of the sort often deemed beyond the purview of the photographic medium.

At the most basic enumerative level, Does Yellow Run Forever? consists of three interwoven photographic series: photographs of rainbows; photographs of a woman sleeping; and photographs of gold - trading pawn shops. Each series is narrowly self - contained, while their combined overall scope is far - flung: the rainbows were all photographed in Irelan d; the sleeping woman (Graham’s partner) was photographed in various bed - and - breakfasts in New Zealand; and the gold shops were photographed in New York City during the recent economic crisis. Similarly, despite the ostensibly limited subject matter, Does Yellow Run Forever? covers a remarkable emotional and artistic range that is broad enough to encompass tender portraiture, technical virtuosity and social critique. And when woven together, the three component series resonate with intersecting echoes and o vertones: the sleeping woman, perchance dreaming, arrayed in a spectrum of brightly colored sheets; the rainbows’ spectrums splayed across the vast, cloud - scudded skies, each with a legendary pot of gold at its end; and the ends of dreams (the legendary ‘A merican’ dream included) of the pawn shops, with their garish yellow signs offering ‘cash for gold.’

Nearly all of Graham’s work contains a highly informed element of reflection on photography itself, a reflection that involve s challen ging not only the te chnical stri ctures but also the deep - seated conventions of the photographic medium. Thus in Does Yellow Run Forever? (which, like most of Graham’s photo - projects, has also taken carefully executed book form) the artist has employed common, popular motifs that, while not outright banal, are rarely found within the vocabulary of fine - art photography, and yet by combining them has managed to arrive, as if alchemically, at a finished product that is anything but common. And at the same time, and perhaps more am bitiously, in Does Yellow Run Forever? Graham has pointed the camera’s fundamentally documentary mechanisms toward that which lies beyond physical documentation, toward that which is literally intangible, toward that which exists only (and there only fleet ingly) in the hearts and minds of lovers and dreamers, in a daring attempt to weave an image, like a rainbow, out of thin air.

Paul Graham (United Kingdom, 1956) has had more than 80 solo shows over the last 35 years, including at the Museum of Modern Art MoMA (New York) , the Tate Gallery (London) , the Fundación Botín (Santander) , the Whitechapel Gallery (London) and Fotomuseum Winterthur (Zürich). He received the Hasselblad Award in 2012 and his photo - book a shimmer of possibility was awarded the Paris Ph oto Book Prize for the best photo - book in the preceding 15 years. The exhibition Does Yellow Run Forever? at the Galerí a Elba Benítez forms part of PHotoEspaña’s 2015 Off Festival.

George Stolz
1) According to Graham, the phrase has its source in a question asked in an art class at a home for the mentally disturbed, wher e a friend of Graham’s was teaching at the time.