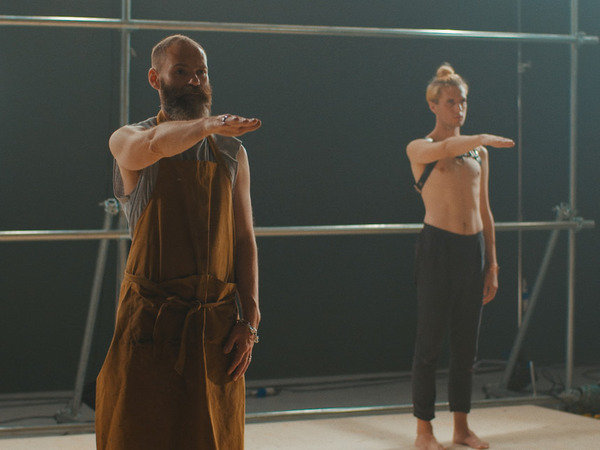 Rather than focusing on Tom of Finland’s work, Staff’s film evokes the foundation as a set of relations. He explores how a collection is formed and constituted; the communities that produce and are produced by a body of work; and ideas of intergenerational relationships and care. Through observational footage of the house, its collections and inhabitants, the foundation is revealed as a domestic environment, a libidinal space, archive, office and community centre; a private space which is also the home of a public-facing organisation and the source of a widely dispersed body of images.

Staff foregrounds his own identity and his personal dialogue with the different communities of the foundation to consider how ideas of intergenerational inheritance and exchange are complicated by gender identity and presentation; in this context, of a younger trans person in an environment dominated by the overtly masculine, male identity of an older generation. Documentary footage of the foundation is intercut with a series of staged scenes. The set incorporates aspects of the building’s architecture and purpose, operating within the register of experimental theatre. In these sequences, featuring his interactions with an older actor, Staff uses choreography and props to explore the body as a site for the construction and deconstruction of subjectivities. The language of the stage set is extended by Staff’s new sculptural works, commissioned for this exhibition, which make use of materials designed to construct the image of an exterior.

With thanks to the Tom of Finland Foundation. The Foundation is supported by Arts Council England Grants for the Arts, The Elephant Trust and the Genesis Prize.
Patrick Staff

Patrick Staff (b. 1987) is a British artist based in London and Los Angeles who works with video, installation, performance and publishing. He frequently collaborates with other artists, dancers, historians and public participants creating malleable frameworks for socially engaged research mediated by moving image.

Self-taught artist Reto Pulfer uses painting, drawing, writing, music, found objects and everyday materials such as textiles, food or spices to create intuitive, and yet complex, synaesthetic environments, ‘total artworks’ that need to be experienced. Often immersive, always site-specific, they embody various mental and conceptual states or Zustände, as the artist calls them.

Pulfer’s project for Spike Island, Gewässerzeiten (‘waters-times’, to give a literal translation of this neologism coined by the artist), involves a giant fishing net, silt sourced in the local river and watercolours representing territories surrounded by seas; in short, it’s all about water. For his first solo exhibition in a British institution, Reto Pulfer has knotted a large-scale net, hanging from which are bells, ribbons, dehydrated food and ceramics fired by the artist on the opening night during a live performance. These pieces, removed from the kiln while still glowing hot and subjected to a fast cooling process in sawdust, bear the marks of their making. Their intense colours and crackled surfaces are the unpredictable outcomes of the traditional sixteenth century Japanese Raku pottery technique, which reflects Pulfer’s interest in working with chance operations. An ambient soundtrack of looping guitar riffs and chords created by the artist accompanies this installation.

Shown alongside this work are hand-drawn maps which recall places the artist has lived, travelled to or imagined, and a collection of games devised over an extended period of time, including shields and weapons crafted out of paper by Pulfer as a child. They expand on Mnemonics, an ancient memory technique which was researched and revived by the historian Frances A Yates in her 1966 essay The Art of Memory. These accompanying studio works document Pulfer's making process and echo his interest in language and writing, which has culminated in his recently completed novel, The Eccentrics.

The exhibition is supported by the Swiss Arts Council Pro Helvetia, the Stanley Thomas Johnson Foundation and the Swiss Cultural Fund UK. With thanks to Hollybush Gardens, London.
Reto Pulfer

Working with and under hypnosis, Hayley Lock assumes the identity of one or more altered selves to explore parallel time frames, identities and locations through drawing, collage, sculpture, sound and film.

Test Space is a project space run and curated by Spike Island Studio Holders showing both finished work and works in progress.