Gig Poster and the Flatstock Convention 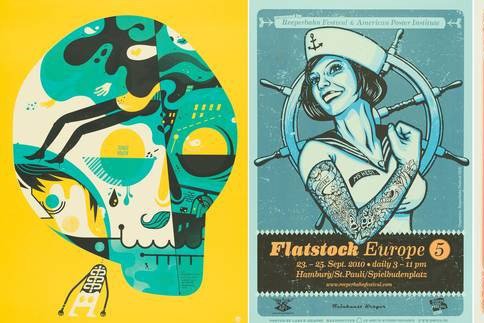 It all started a good twenty-five years ago in San Francisco: Frank Kozik and other rock music fans were tired of the uniform designs of the marketing strategies and decided to design posters for their favourite bands themselves. They made silkscreens interpreting the musicians' music and performances with motifs that were defiant, colourful, often facetious and never boring. The posters, produced in small editions always with the bands' consent , were intended for the fans. They did not so much serve as concert announcements, but were collected above all as art. An international movement emerged from this practice and since 2000 has been showcased on a joint website . Two years after its launch, the site in turn gave rise to the Flatstock Poster Conventions: the screen printers meet on the side-lines of major rock music festivals and jointly offer their prints. The first Flatstock Poster Convention took place in San Francisco in 2002. The South by Southwest Festival that takes place annually in Austin, Texas gradually evolved into the setting for the scene's biggest gatherings. The American Poster Institute, which coordinates and organizes the conventions, is also located in Austin. This July, Chicago is hosting what is already the 50th Flatstock Poster Convention; the 51st will follow in Seattle and the 52nd will take place in Hamburg at the end of September. The first non-American Flatstock Poster Convention was carried out at the Reeperbahn Festival in 2006, and now the bold and colourful prints will be offered there for the tenth time. The exhibition of more than a hundred silkscreens was developed in cooperation with the Hamburg gallery Feinkunst Kruger, the Flatstock Poster Convention and the Reeperbahn Festival.