The exhibition brings together works by 20 artists. It explores the attraction-repulsion effect associated with Mykonos, as well as the current situation of tourism and the sociopolitical upheavals in Greece. 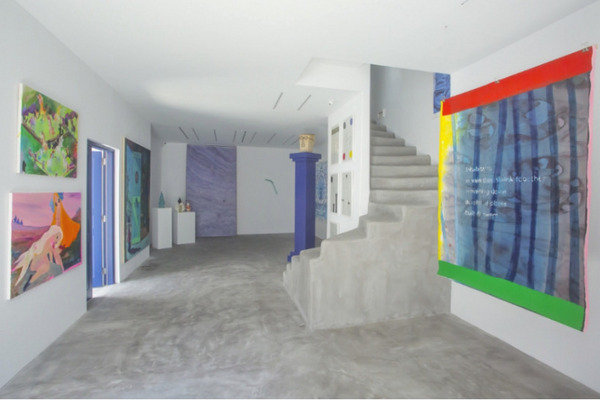 The exhibition, as well as the host cultural platform, is under constant transformation; the artworks change often, old works give way to new ones, bringing along fresh perspectives.

To this, the art historian Marina Vranopoulou comments, “Dio Horia functions as an ongoing research, a question we are trying to answer, an art platform. In other words, it is a space that works as a starting point and not as a destination.''

The exhibition explores the attraction-repulsion effect associated with Mykonos, as well as the current situation of tourism and the sociopolitical upheavals in Greece. First, the participating artists received a lot of material regarding all features that characterize Mykonos from antiquity to today. Afterwards, they were invited, through the artist residency program, to spend some time on the island, to explore it and create their own view of it in relation to the stereotypes that it is associated with. They were then called to transform this experience into creation.

Selma Parlour’s work Dio, 2015 is inspired by the colours and the microclimate of the area, which is affected by and brought about through very high sun concentration.

Pelican and June, 2015, by Vassilis H. juxtapose the artist’s labour intensive aspect that his creative process requires with the ways and colours of the summer life that he found here in Mykonos.

The figures in the sculptures of Panayiotis Loukas and Malvina Panagiotidi are derived from the movement of the figures seen in the Archaeological Museum of Mykonos, and the archaeological site and museum of Delos.

Olga Migliaressi-Phoca’s work Cock Tales & Dreams, 2015 is a play between the sexual liberty and the obsession with pop culture and aesthetics often characterizing a lot of Mykonos fans.

Elias Kafouros work You won’t see the birds but you will find their feathers, 2015 has employed features from Dio Horia’s logo morphologicaly speaking, whereas it conceptually is inspired by typical images of the island.

Atelier Arizona’s work Untitled (Stairway to Heaven), 2015, is based on the most iconic architectural element of Mykonos, the Windmills.

Over the next months, Maja Djordjevic, Rallou Panagiotou, Alexandros Tzannis, Wilhelm Sasnal and Linda Havenstein will present new artworks as a result of their stay and research here.

Works by Tzannis, Panagiotou and Sasnal are already displayed in the exhibition site. In her work Panagiotou, (as in Twice solid, 2015, for instance), focuses on the relationship between the natural and used items and materials such as an eyeliner, a lyrca bathing-suite, plastic straws, and how these are perceived as –-- and as temporary extensions of the body. These works explore the notion of mechanisms of presentation of the self in social contexts of luxury and such.

Sasnal participates with the work Leros, 2014 which leads him to paths that balance between realism, imagination and representation.

Relevant to the above mentioned works, is the series of works by Jannis Varelas Truck Green Lights, 2015. In this series, Varelas uses archival material from children’s drawings, especially ones that are drawn during psychological testing.

Hugo Canoilas presents a series of work (such as Inhabitants, in vain they shrink together, 2015). These works draw from philosophy, poetry and the fundamental ideas of Modernism. They further aim to move the audience regarding the socio-political factors that affect the historical memory and contemporary culture.

The sculptures of Dionisis Kavallieratos’, such as the Get the bastards sweetie 2, 2008, function as an antidote to the mere fact of an exhibition taking place in Mykonos, due to the black humour that characterizes them, and their ironic, yet simple way of addressing reality.

The paintings of Panagiotis Loukas are a continuous tale of a familiar delirium resembling a dream that is unable to be ended by the arrival of morning.

Aleksandar Todorovic’s works, such as Glorious leader, 2007 are imbued by the idea that social and moral values collapse following periods of crisis.

The esoteric investigation is at the focus of Panos Tsagaris’ practice, throughout which he’s confronting various traditions and religions, as shown in his work I am An Infinity In The Becoming, 2015.

Aleksandra Urban creates in her works (as in Sorceresses, 2014) an unreal vision of everyday life, a world parallel to our own familiar and mundane one.

Finally, Honza Zamojski combines the conventional forms of art with elements of pop & urban culture, wittily commenting on the latter.