Josh Kline presents 'Freedom' an immersive environment which incorporates sculpture, video, and architectural elements. 'Fly Me To The Moon' comprises work by Kiki Kogelnik from the 1950s to the 1980s. 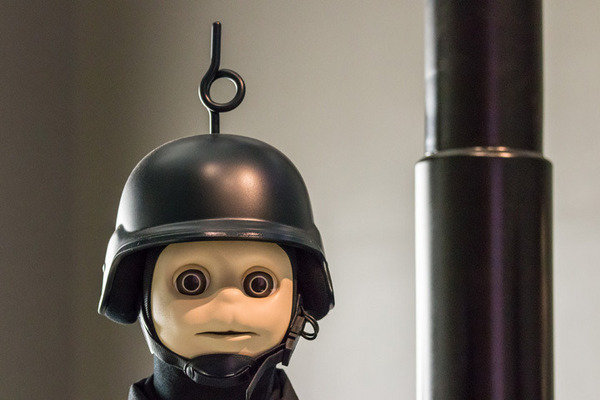 Freedom marks the European premiere of the installation of the same name, first exhibited at the New Museum Triennial in New York in February 2015 to widespread critical acclaim. This installation has now been expanded into a larger solo exhibition for Modern Art Oxford, the first in a public gallery for American artist Josh Kline (b. 1979).

Freedom is an immersive environment which incorpo­rates sculpture, video, and architectural elements that address the era that began with the 2008 financial crisis and the fate of the viral political movements that have arisen in its wake. The installation explores the digitisation of identity, the voluntary and involuntary dis­solution of privacy, and the political consequences of this way of living. Modelled after the cor­porate architecture of Zuccotti Park, the privately owned public space in New York City's Financial District where Occupy Wall Street encamped in September 2011, the installation incorporates LED lighting, cell-phone antennae disguised as trees, and life-sized ‘Police Teletubby’ sculptures. The project is anchored by a video entitled Hope and Change (2015) in which President Obama is recreated through facial substitution software, delivering a reimagined version of his Inaugural Address in January 2009.

Rising to prominence in the mid 1950s in Vienna, Kogelnik was later encouraged by American artist Sam Francis to move to the United States where she became friends with luminaries of the New York art scene including Roy Lichtenstein and Claes Oldenburg.

Engrossed by the vitality of New York, Kogelnik’s work and lifestyle underwent a dramatic shift as she experimented with sculpture, prints, ceramics and performance. In Fly Me To The Moon, works are presented which attest to her growing trepidation about the development of new technologies.

Inspired by advanced high-tech materials and the dehumanising effect of new technology in the 1970s, Kogelnik began to create a new series of bright vinyl ‘hangings’ such as Claes (1970). In these works, Kogelnik would trace the outline of a figure onto a large sheet of paper, transferring to vinyl and present it on metal clothes rails.

Platform is an annual award designed to nurture new artistic talent by selecting and exhibiting work from art school graduates from the South East region, providing support through the critical period between graduation and life as a professional artist.

Laurien Ash’s work is concerned with the intersection between human experience and technology. Ash created virtual worlds and narratives for the viewer to explore using familiar tools such as a mouse or a screen. It is through these interactions, the ways in which we control technologies, that Ash attempts to disrupt both our understanding of what we are seeing and the level of control that we have over it. The mouse appears not to work, the video disrupted, drawing the viewer deeper into the digital world.