Tuiza. The Cultures of the Bedouin Tent. In Hassaniya Tuiza means solidary collective work: coming together, participating and building something jointly. Workshops and other collective activities will take place during the exhibition period. 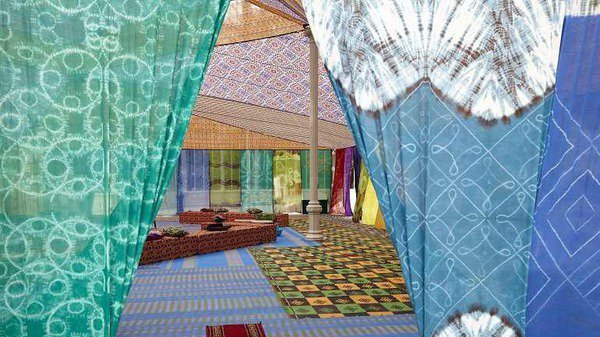 Actively working since the mid 1980s, Federico Guzmán (Seville, 1964) has always viewed artistic practice as a commitment to his environment. His spells in New York and Bogotá at the end of the 1990s lead him to lay great emphasis on this idea as he became particularly aware of art as a tool for social change, as well as understanding the figure of the artist and seeing his work as something inextricably linked to the context he lived in.

For a period of over six years, Federico Guzmán formed strong ties with the Sahara, sharing experiences with the native people in the region. The project devised for the Palacio de Cristal is the outcome of this personal experience and, on this occasion, he has erected a large Bedouin tent to enter into dialogue with the historic building. As in the traditional homes of the desert nomads, the roof of this massive textile construction is made using benias, a thin acrylic fabric that is resistant and always decorated with multi-coloured geometric motifs. However, in this instance the artist has replaced the benias on the sides with melfhas, traditional gowns worn by women in the Sahara.

In Hassaniya Tuiza means solidary collective work: coming together, participating and building something jointly. Therefore, Tuiza is the essence of Federico Guzmán’s project as he presents this huge Bedouin tent as a space for hospitality and conversation between cultures, workshops and other collective activities that will take place during the exhibition period.

The current project is the result of a collaboration with Donostia 2016. Once the exhibition comes to a close in the Palacio de Cristal, the Bedouin tent will be brought to life again in Museo San Telmo in San Sebastián.

Opening of the exhibition April 15 at 8 p.m.