Be a Place, Place an Image, Imagine a Poem. The show aims to represent a new landmark in the study of her work, consolidating the research conducted up to now to make it the most complete retrospective to date that runs from her early work in the late 60es through to her final pieces. 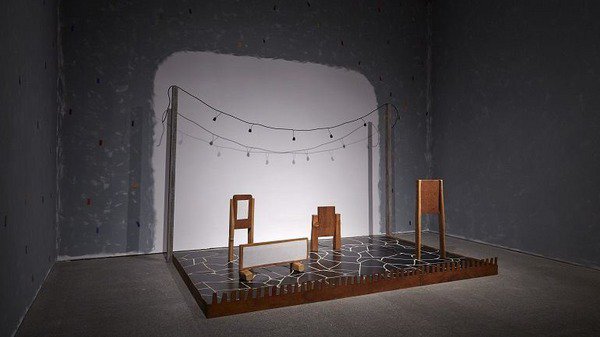 The work of Ree Morton (Ossining, NY, 1936 – Chicago, 1977) can be found in the specific art scene in the USA around 1970, characterised by a strong reaction to Abstract Expressionism, via Minimal art, on the one hand, and Conceptual art and Pop art on the other. Different hard-to-classify movements materialised and were defined by Lucy Lippard as “Eccentric Abstraction”, or, for instance, Post-minimalism and phenomenological and performative practices inclined towards ritualism, animism and the body.

The beginning of Ree Morton’s career in the late sixties was characterized by an appropriatonal mode towards Minimalism and Post-minimalism. However, the minimalist dogmas of asepsis, non-composition, seriality and the use of industrial materials were counteracted by the artist with the above mentioned practices as well as a phenomenological and cartographic exploration of space.
Later in her career she would evolve a particular allegorical repertoire by adopting a specific use of materials for highly theatrical and emblematical settings, which recurred to rhetorical twists and turns, to art history, codes of the so called feminine and the performative potential of sculpture.

A first major retrospective of her work was organised in the New Museum in New York in 1980, yet it wasn’t until 2008-2009 that another solo exhibition was held, this time in the Generali Foundation, Vienna.
The show devoted to the artist in the Museo Nacional Centro de Arte Reina Sofía aims to represent a new landmark in the study of her work, consolidating the research conducted up to now to make it the most complete retrospective to date that runs from her early work through to her final pieces.

Opening of the exhibition April 15 at 8 p.m.