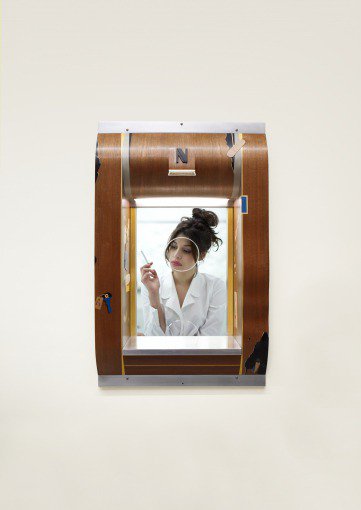 In 2014, Blatrix was awarded the prestigious Prix d’entreprise Ricard, which annually gives a monetary prize to an emerging French artist whose work has been exhibited at the Foundation’s space in Paris. For the 16th edition of the award, the Foundation wished to honour the artist with a solo show outside France. The exhibition in MOSTYN, a UK premiere, presents entirely new work by the artist and responds to his visit to the town of Llandudno in 2014. For the show, Blatrix has invited his parents Dorothée Loriquet (a ceramicist) and François Blatrix (formerly an artist) to present their own work alongside his own, hosted within a scenography developed by Camille Blin. The exhibition discusses the role of biography, influence, upbringing and artistic career, setting the tone for MOSTYN’s ongoing Conversation Series, a sequence of shows that brings together exhibitions in conversation.

In part, a survey of the discipline of painting today, the works display a range of approaches, styles and conceptual concerns, and point to painting’s continued relevance. The work of contemporary artists will be shown alongside a historical element, which examines the local art scene leading up to the formation of both the Royal Cambrian Academy and the Gwynedd Ladies’ Art Society (GLAS).

Be More Brando is a new installation work by Thomas Goddard comprising a film, wall piece, sculpture, text and a limited edition print exploring the mythology surrounding American actor, Marlon Brando. In using his archive of compiled Brando impersonations to uncover the truth behind a global phenomenon, this work is part of the artist’s research into the nature of truth.

Thomas Goddard is based in Swansea and received the 2015 Creative Wales award, as well as the 2015 Artist in Residence at Standpoint Futures in London.