The Man Who Built Brasilia will present a comprehensive overview, incorporating plans, models, photographs and video footage, of close to a century of architectural design by the legendarily charismatic Niemeyer, who was still indefatigably turning out new designs right up to his death at the age of 104. 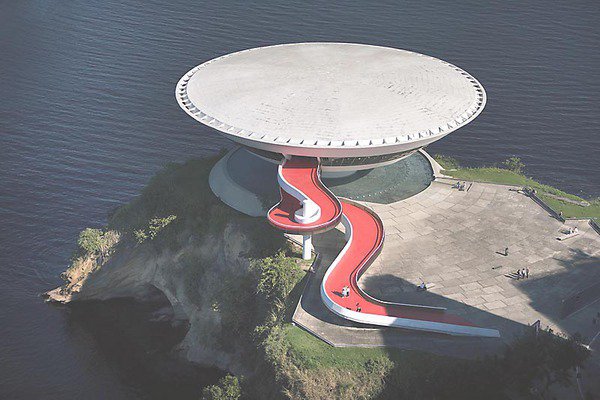 The Museum of Contemporary Art Tokyo is proud to stage Japan's first major retrospective of the work of Oscar Niemeyer (1907-2012), father of Brazilian modernist architecture.

The unique creativity of Niemeyer's designs for prominent buildings in his native Brazil earned him tributes both at home and abroad, including a raft of architectural awards such as the American Institute of Architects Gold Medal, Pritzker Architecture Prize, and Japan's Praemium Imperiale as well as the International Lenin Peace Prize. "Oscar Niemeyer - The Man Who Built Brasilia" will present a comprehensive overview - incorporating plans, models, photographs and video footage - of close to a century of architectural design by the legendarily charismatic Niemeyer, who was still indefatigably turning out new designs right up to his death at the age of 104.

Born in Rio de Janeiro, Oscar Niemeyer studied architecture at Rio's National School of Fine Arts before going on to work with his mentor Lúcio Costa. Following an encounter with Le Corbusier, Niemeyer worked with the modernist master in the design of the Ministry of Education and Health in Rio de Janeiro (1936) under the coordination of Lúcio Costa.
Already famous in his own right after having designed Pampulha architectural complex, Niemeyer worked with Le Corbusier again in designing the United Nations Headquarters in New York (1947). Niemeyer's greatest achievement however would have to be the building of the new capital Brasilia, Brazil's preeminent national project of the 1950s. Designing several of the major buildings (including the National Congress building and Cathedral of Brasília), Niemeyer created a city of the imagination. The triumph of Brasilia took on historical significance above and beyond its architectural brilliance, raising Brazil's international profile, and in 1987, earning its unique capital World Heritage status.
During the country's military regime of the 1960s, Niemeyer moved to Paris and based his practice there for 20 years, returning to his native land in 1985 and continuing to work prolifically, at the same time endeavoring to nurture his successors.

Niemeyer, who always insisted on the importance of art in architecture, had been gifted at drawing from a young age, and found that if he looked at his pictures for long enough, they began to feel real. Niemeyer's designs are suffused with the boldness and freedom of freehand drawing, and the physicality with which these traits are converted into spatial form, and distinguished by organic, dynamic lines likened to the curves of a woman's body, and a harmonious blend of vitality and modernist geometry.

Their futuristic shapes have also served as an inspiration to many Japanese architects.

As Brazil and Japan celebrate 120 years of diplomatic relations and Rio de Janeiro prepares to host the Olympics in 2016,
"Oscar Niemeyer - The Man Who Built Brasilia" will showcase a century of this great architect and son of Rio.