The Museum opened up its depots to thirty experts and culture producers from institutions as a way of tracing various possibilities, motifs and functions of this phenomenon with the aid of the objects they selected. 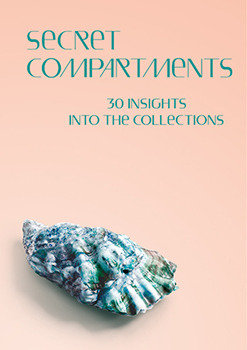 A chest, a pill box, a folding screen ‒ what these so very disparate objects have in common is that they all define a space. They offer an in-front-of or a behind, an on-top-of or an underneath, and they are distinguished by the ability to reveal or conceal, depending on the perspective of the beholder.

At the core of the exhibition Secret Compartments is the multiperspectival contemplation of the museum’s own heterogeneous collection with regard to the phenomenon of concealment. The Museum Angewandte Kunst opened up its depots to thirty experts and culture producers from museums and institutions as a way of tracing various possibilities, motifs and functions of this phenomenon with the aid of the objects they selected. Through the item chosen, but also through its curatorial staging, each individual presentation comments on the double character of revealing and concealing anew.

A piece of furniture can be viewed, for example, as a body to be laid bare so as to expose its function down to the last box spring. Other objects remain closed and make use of filmic, audio or material interventions to allude to their possible contents, which can be conveyed fictitiously, subjectively or cultural-historically. The secret or the suppressed, the unwanted or the valuable may be hidden behind a folding screen, in a suitcase or in a small chest. With the aid of a filmic projection, a pill box makes reference to the cultural history of female hysteria, and a cosmetic case points to the human desire to conceal something with the help of an object. The interplay between concealment and exposure made possible by objects with the aid of drawers, doors and lids in turn creates stages for further items and reflections. Finally, there are also objects – for example a bookcase by Dieter Rams – that profess to keep nothing secret. In the context of the exhibition, this set of shelves becomes an ironic commentary, particularly when it is rendered nearly invisible itself behind its load of books.

Secret Compartments inquires into the stories concealed in objects and, with some thirty individual presentations, takes a heterogeneous and eclectic look at the Museum Angewandte Kunst collection. The exhibition sets a process of disclosure in motion and takes individual perspectives as points of departure to ask how a museum and its collection function.

In the course of the Secret Compartments show, a catalogue will be published containing views of the exhibition and contributions by Julia Koch, Matthias Wagner K, Wolfgang Ullrich, Sebastian Hackenschmidt and others.