Futopia. The artists has intervened with the triple-height, windows of FAC and created stained glass designs that transform the Sala Molinos into an alternative cathedral. 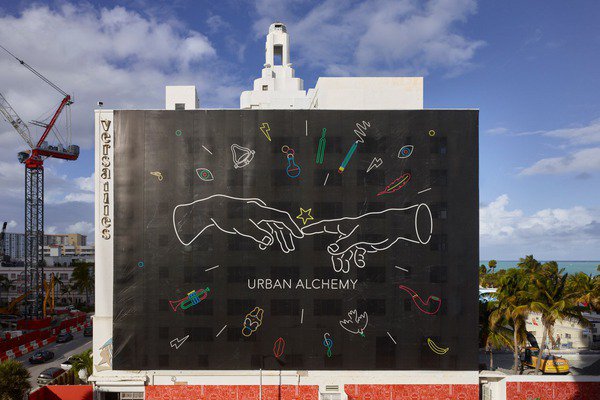 Faena Art presents the story of four years of collaboration between Faena and the renowned Antwerp- and Amsterdam-based design duo Studio Job with an immersive exhibition that takes over the Sala Molinos, the main exhibition space of Faena Art Center Buenos Aires. For Futopia Faena by Studio Job, which opens to the public at FAC on July 23, 2015, Studio Job has intervened with the triple-height, cathedral-style windows of FAC and created stained glass designs that demonstrate the trajectory of Faena's distinct symbology and transform the Sala Molinos into an alternative cathedral of light and color that will also serve as a roller dancing installation, with celebration and revelry at its heart.

Alan Faena notes, "Studio Job and Faena's ongoing collaboration is a true manifestation of the Faena mission to foster cross-cultural exchange. Futopia Faena by Studio Job illustrates our personal path and stylistic evolution, and demonstrates the beautiful things we aim to share with the world. As we near the opening of the Faena District Miami Beach in November, we are particularly pleased to be able to present commissions they have created for that space with the Argentine public."

"Working with Faena is not working…Playing with Faena is intellectual fun and the upcoming, multifaceted exhibition at Faena Art Center showcases how our longstanding collaboration with Faena has been an incredible series of inspiring experimentations," notes Studio Job.

About Studio Job
Job Smeets and Nynke Tynagel founded Studio Job in 2000. In the 15 years since they graduated from the Dutch Design Academy in Eindhoven and formed the studio, they have become contemporary cultural pioneers who are revolutionizing common preconceptions about the distinct realms of art and design. Studio Job is a design studio in the true spirit of the Renaissance, where techniques are interchanged and disciplines are disregarded towards creation of the new—a place where culture, spirituality and aesthetics converge in one cacophonous space, and where production and craftsmanship yield one-of-a-kind objects and environments that bridge art and design, occupying and redefining the gray area in between. Contrary to contemporary ambivalence towards the decorative arts, Studio Job is revolutionizing perceptions of the genre, allowing for the opulence, ornamentation and intricacy of their designs while remaining committed to a high level of craftsmanship.