Ghirri's was an enigmatic vision of the everyday; he chose to make strange the ordinary, revealing life as a little empty and alienated but never especially unhappy or disturbing. Aleana Egan's exhibition provides an intimate encounter with a single new sculpture. 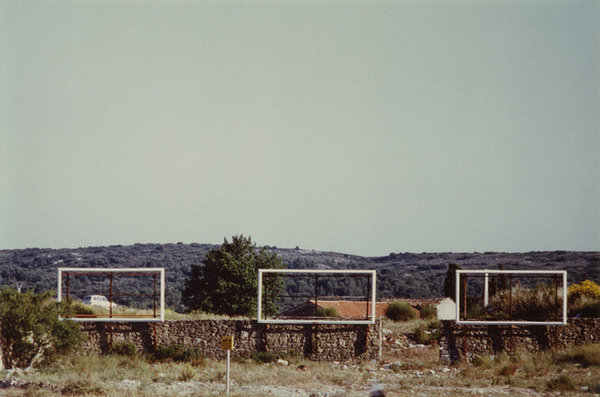 Luigi Ghirri’s photographs can seem nostalgic, but they woudn’t have come across that way in the 1970s, when most of them were taken. He liked unremarkable places such as seaside resorts, amusement parks, farmhouses, tourist attractions, and nondescript city streets; he wasn’t drawn to anything particularly dramatic, nor did he invest them with strong feeling. Ghirri’s was an enigmatic vision of the everyday; he chose to make strange the ordinary, revealing life as a little empty and alienated but never especially unhappy or disturbing.

Although his deadpan images are apparently effortless, they are possessed of understated and puzzling complexity; beneath their calm surfaces there is a peculiar ambiguity that can be associated with the passing of time, and with doubt, humour, and mystery. Operating in a liminal space between realism and metaphysics - not unlike his Italian compatriots Giorgio de Chirico and Giorgio Morandi - Ghirri quietly draws our attention to things, relationships, and ideas that most people don’t notice.

Luigi Ghirri (1943 - 1992) has received much acclaim for his photographs in the past decade. In 2008, the Aperture Foundation produced the first book on his work in English, and his work was featured in the 2011 and 2013 Venice Biennales.

The Douglas Hyde Gallery warmly thanks Adele Ghirri and Matthew Marks Gallery for their support of the exhibition.

Aleana Egan’s exhibition provides an intimate encounter with a single new sculpture. The form of a canopy suspended above low constructions on the floor gives some sense of the oppositions often found in the artist’s elusive work; traces of fleeting memories and interactions between people are revealed intuitively through the colour, texture and weight of the materials used.

Egan’s work is in part an attempt to communicate the mood and atmosphere that she finds in films, books and artworks. The Dressmaker, a painting by Margaret Clarke, from which the artist drew much of the spirit of her new sculpture, is included in the exhibition. A Letter to Three Wives, a 1949 film by Joseph L. Mankiewicz was also influential.