The focal point of the exhibition will be such topics as cars, traffic, highways, and speed, all of which were a major influence on the spirit and reality of the 1960s, inspired as they were by conurbations and global aspects. Industrial products such as the vehicles produced by VW, Chrysler, Rolls-Royce (driven by The Beatles), Bentley, Pontiac, BMW and Cadillac were a major influence on Pop art motifs in sculpture, painting, photography and graphic art. On the occasion of the 28th Duisburg State Festival program 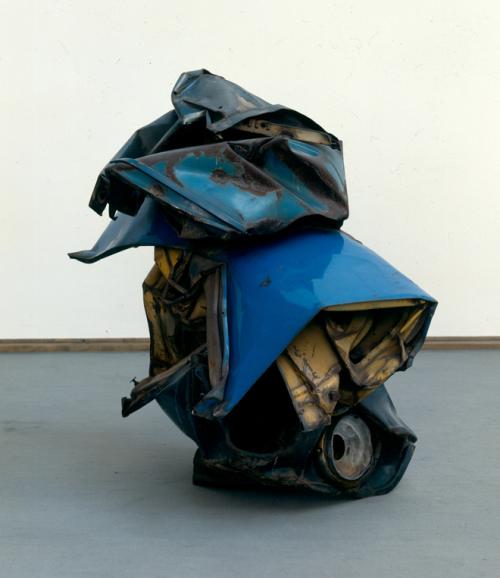 This year, the extensive Duisburg State Festival program that accompanies ''Akzente'' is entitled ''Terminus America?'' and devoted to the USA. Like all other cultural institutes, the Stiftung Wilhelm Lehmbruck Museum has agreed to use this topic to present an exhibition focusing specifically on the USA. We shall be concentrating on ''POP CARS. America- Europe''

The focal point of the exhibition will be such topics as cars, traffic, highways, and speed, all of which were a major influence on the spirit and reality of the 1960s, inspired as they were by conurbations and global aspects. Under the title ''The Automobile in Art 1886-1986'', the very first extensive retrospective was staged in back in 1986 in the ''Haus der Kunst'' in Munich. It became clear even then that industrial products such as the vehicles produced by VW, Chrysler, Rolls-Royce (driven by The Beatles), Bentley, Pontiac, BMW and Cadillac were a major influence on Pop art motifs in sculpture, painting, photography and graphic art. Warhol's various series of ''Cars'' were just as important as the ''Art Cars'' commissioned, as of 1975, by BMW AG in Munich and designed by Frank Stella, Andy Warhol, Roy Lichtenstein, A.R. Penck, and David Hockney, to name just a few. Christo's packaged traffic signs, John Chamberlain's welded car parts, CÃ©sar and Arman's compressed bodyworks and accumulations round out the picture. In both Europe and the USA the artists' critical stance on advertising and industry finds its counterpart in Warhol's ''Crash'' and ''Disaster'' pictures, Edward Kienholz' ''Tableaux'' and Vostell's ''Concrete Cars'', but primarily in the environmental campaigns with car tires, which Allan Kaprow staged in California and Germany (the ''Yard'' campaign). The legend of the car as a symbol of unlimited freedom and technical innovation has nonetheless managed to prevail. Nowadays with its much admired, successful dynamism, its carefree proximity to reality and its renewed search for the unity of art forms, Pop art is experiencing an astonishing revival.

The Lehmbruck Museum project will be the result of in-depth research, and will present groups of work on the topic from the Gottfried Schultz VW collection, the BMW Car Collection (Warhol), the DaimlerChrysler Collection (''Cars'' by Warhol), the ADAC (German Car Association) collection in Munich, museum and private collections (the Ludwig KÃ¶ln collection, art museums in Krefeld, and Ludwigshafen, and the Schloss Moyland Foundation). For the very first time the museum's own VW Beetle, which Geoffrey Hendricks painted in 1976, will be complemented by a collection of associated works consisting of drawings and sculptures. In addition, true-scale cars and racing cars, which Warhol, Wesselmann (Landscape No. 2) and Vostell (Cadillac Swing) re-interpreted artistically will be on show. The most famous Mercedes-Benz silver arrow, the 1954 W 196 R Stromlinie, which Warhol also ''portrayed'', will be an outstanding highlight. This compilation of works has enabled us to present a genuinely exciting ''POP CARS'' chapter, which is guaranteed to appeal to the public, and in which the focus alternates between examples of sculpture, painting, advertising, photography (of the 1950s), drawing and graphic arts. In particular the extensive Gottfried Schultz GmbH collection and the Beck Pop Collection in Ludwigshafen are able to illustrate admirably these typically American and European phenomena associated with cars, traffic and technology, as well consumerism, destruction and death in the context of popular image media (screen prints).

To go with the exhibition, a Catalog-object with numerous color illustrations, historical and actual texts is available at a cost of EUR 19,90. Furthermore an illustrated article about the exhibition is published in Vernissage Rheinland (EUR 5).

Subsequently on show at the Municipal Museum in Heilbronn: July 17 thru Oct. 10, 2004

The exhibition will be accompanied by an extensive back-up program.

More on the program on the web site