Grey Magic. The exhibition combines sculptural interventions with the setting for staging a psychological experiment, a new series of prints, and a film project. The themes are his engagement with fringe science and parapsychological ideas. 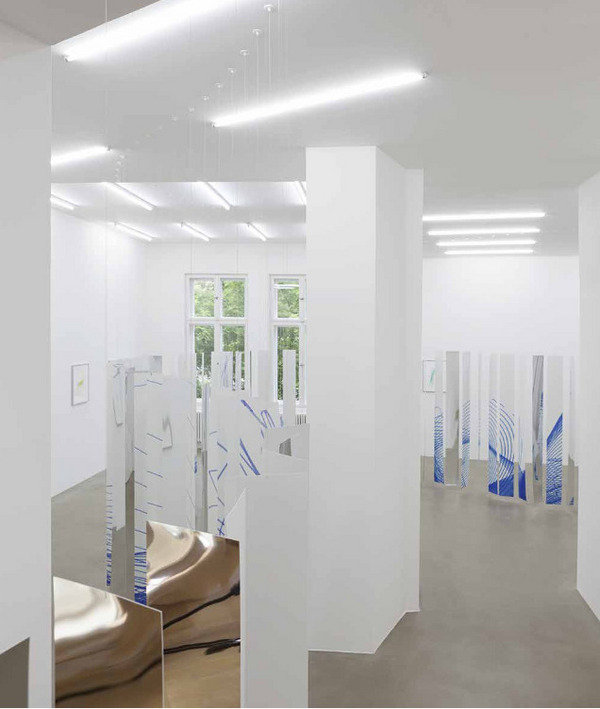 Esther Schipper is pleased to present the sixth solo exhibition of Christoph Keller with the gallery.

Grey Magic brings together themes from Keller’s ongoing aether project, his engagement with fringe science and with parapsychological ideas. The exhibition combines sculptural interventions with the setting for staging a psychological experiment, a new series of prints, and a film project that will be completed during the course of the exhibition in the gallery space.

A large-scale mirror installation forms a spiral that unites both rooms of the gallery. Made from more than 130 individual suspended sections that have slight play, the elements align and de-align as coherent presence, showing in turn the mirrored surface on one and the pattern based on Keller’s spiral drawings on their other side. In the second room, enclosed by part of the spiral, a sensorial experiment, Mental Radio, requests visitors to take part in a psychological test involving telepathic image transference. In the front room, visible from the outside, is an illuminated work, Title Tool for an Imaginary Cinema.
A series of prints, installed in both spaces, combine drawings of spirals with Keller’s chapter-by-chapter summaries of Grey Magic, a 1922 novel by Salomo Friedlaender/Mynona that gives the exhibition its title.

Keller’s exhibition takes as point of departure the deep entanglement in early twentieth century Berlin Bohème circles where scientists, philosophers, artists, writers, actors, and other creative figures exchanged ideas. This period, dating roughly from 1906 to just after World War I, found a particularly enchanting, now somewhat forgotten expression in Mynona’ book. A volume reprinting part of an essay by Erich Marcus, whose theory of “eccentric sensation” (and a character based on the philosopher) features prominently in that book, several historical documents and texts by Keller is published on occasion and as part of the exhibition.