The new centre for contemporary creation and culture open its doors. "Outlines of the audiovisual. Points for a movement that surrounds" is the first exhibition that will be inaugurated on the same day that the centre opens. It includes works by 21 national and international artists and revolves around the concept of the audiovisual. 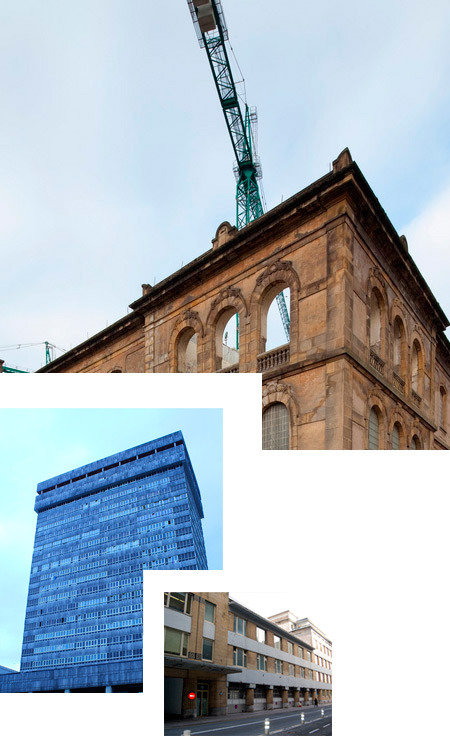 Tabakalera, a centre for contemporary creation and culture, will open its doors next September 11 th . Initially part of the spaces of the cultural project itself will be activated and during the autumn months the rest of the spaces and initiatives will be gradually opened with the aim of having the building fully operational by early 2016.

After four years of remodelling work it is expected that it will be completed by late July, leaving August for the finishing touches and the urban development. Thus, the building that housed the Royal Tobacco Factory will be reopened as an International Contemporary Culture Centre.

Regarding the opening, work is being carried out on a special programme that will include all kinds of activities throughout the week. During the days prior to the opening in September there will be guided tours of the building and also the chance to chat with the project managers about matters related to their field of interest. The public opening will be on Friday September 11 th with a special schedule of activities that will extend to the weekend. All with the aim of showing the remodelled building and its cultural project to the public.

The main goal of Tabakalera's cultural project is to promote the creation of contemporary culture in different fields and in all its stages (research, production, exhibition), as well as to generate and share knowledge.

To do so, it will strengthen the creative community and will provide spaces for collaboration and relationships between different agents and the public. It will provide resources for creators to support their professionalisation and, in turn, will create openings for citizens, offering different options to enjoy culture, to learn, to generate critical thought, to experiment and nurture creativity. With this aim, the cultural project of Tabakalera revolves around four lines of work that make up its programme: contemporary artistic practices, mediation, digital culture laboratories - Hirikilabs and the creation library - Ubik.

In addition to its cultural project, other institutions and projects that will contribute towards creating a cultural ecosystem will coexist in the remodelled building: The San Sebastian Film Festival, the Basque Etxepare Institute, the Basque Film library and the Kutxa Foundation. Also part of it will be private initiatives that will develop their own projects, in addition to catering services. Thus, the building will house different uses, initiatives and agents, with the cultural project as the backbone.

Gradual openings from September until the end of the year: The spaces related to Tabakalera's cultural project will be almost completely activated during the months of September and October. The rest of the spaces and services of the neighbouring institutions will be gradually activated during autumn. Thus, the aim is to be fully operational by the year 2016, a very important year for the city of San Sebastian.

For the opening weekend, there will be a special schedule of activities. The opening exhibition, Moving Image Contours: Points for a Surrounding Movement, curated by Soledad Gutiérrez and Anna Manubens, will include works by 25 national and international authors, some of whom will present new work. They include: Ibon Aranberri, Aimar Arriola, Herman Asselberghs, Itziar Barrio, Roger Bernat, Black Audio Film Collective, Eugeni Bonet, Manon de Boer, Analivia Cordeiro, Gonzalo De Pedro, Marguerite Duras, Patricia Esquivias, Dora García, Jean-Luc Godard, Los Hijos, Nader Koochaki, Nicolas Malevé, Pad.Ma, Neus Miró, Itziar Okariz, Uriel Orlow, Alex Reynolds, Fito Rodríguez, Oriol Vilapuig and Marc Vives. The exhibition reflects on the concept of the audiovisual from the outside, seeking references and relationships with other languages or situations where it is hybridised. This exhibition unfolds from the Apología/Antología project, developed in collaboration with the HAMACA media & video art distribution (Spain) and the University of the Basque Country, which will also be presented within the framework of the exhibition.

Also on view during the opening will be a project related to the building's memory, developed by a work group formed by artists and ex-workers from the tobacco factory (Tabakalera). In September, Tabakalera will host one of the official sections of the San Sebastian Film Festival, as well as the EIECINE International Film Students Meeting, which is organised annually by Tabakalera, along with Zinemaldia and DSS2016, and focuses on the more experimental languages of the audiovisual sphere.

Hirikilabs will also be open to work within the framework of digital culture, technological experimentation and social and collaborative technologies.

Open call for residencies
In addition, Tabakalera has launched a residency programme of different modalities to support artists, curators and cultural agents on the development of artistic projects. These modalities include: curator residency, residencies for the production of artistic projects, and a residency for local and non-local agents for the development of a project. The residencies will be a key tool within the Tabakalera project, enriching the cultural programme developed within the centre, integrating external agents into the dynamics of the cultural programme, and promoting the internationalisation of the project by encouraging encounters between the international and the local contexts. Registration period is open until August 16.