Pablo and Efrain. For the exhibition the artist depicts items both specific to the lush landscape of Puerto Rico and her personal affinity for novel and mundane commodities, such as cigarettes, headphones, sharpies and keyboards. 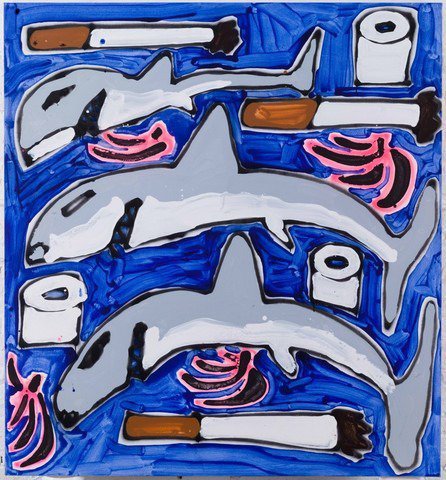 Venus Over Manhattan is pleased to present Pablo and Efrain, an exhibition of new work by painter Katherine Bernhardt, on view beginning September 9, 2015. The exhibition’s title is a nod to the twin artists behind the collective Poncili Creacion, whom the artist met during a recent residency in Puerto Rico. “It’s all about Puerto Rico, so it’s fruit, sharks, water, sea turtles, all tropical,” notes Bernhardt. For Pablo and Efrain, Bernhardt depicts items both specific to the lush landscape of Puerto Rico and her personal affinity for novel and mundane commodities, such as cigarettes, headphones, sharpies and keyboards. In an outpouring of her own experience and imagination, Bernhardt embeds this hodgepodge of loosely rendered objects within a vibrant color field, creating an imprecise pattern. First sketched on the canvas in a stream of consciousness, the elements are then outlined with spray paint and filled-in with thinned acrylic in an all-in-one-shot technique. Self-aware of her mix of the classical and kitsch, Bernhardt exemplifies the quotidian in a whimsical, gestural style.

Alongside her fine art practice, Bernhardt and her husband Youssef Jdia co-founded Magic Flying Carpets, a website and pop-up supporting and maintaining the weaving traditions of the rural Berber women of Morocco, whose patterning often serve as inspiration for Bernhardt’s compositions. In a similar gesture, Bernhardt will cover the gallery floor with coffee bags sourced from Puerto Rico, fastened together to create a burlap rug over the concrete.

Bernhardt’s solo exhibition at the Manhattan gallery follows FRUIT SALAD, a mural covering the exterior wall of the newly opened Venus Over Los Angeles in DTLA. Unveiled on July 26, the massive colorful still-life is the artist’s first public work.