On being an angel. Woodman's photographs explore gender, representation, sexuality and body. Her production includes several self-portraits, using herself and her friends as models. The intimate nature of the subject matter is enhanced by the small formats. 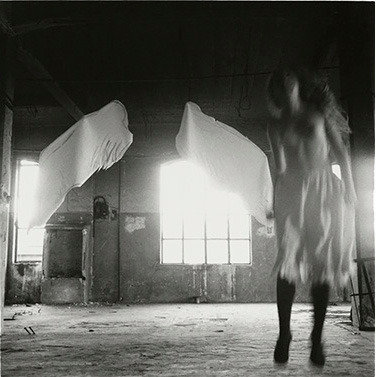 The American photographer Francesca Woodman (1958–1981) created a body of fascinating photographic works in a few intense years before her premature death. Her oeuvre has been the object of numerous in-depth studies and major exhibitions in recent years, and her photographs have inspired artists all over the world.

Francesca Woodman began photographing in her teens and studied at the Rhode Island School of Design from1975 to 1978. Her output is usually divided into periods, from her early works, her years as a student in Providence, Italy (1977-1978), the Mac Dowell Colony, and, lastly, New York from 1979 until she died. The collection she left behind consists of a few hundred gelatin silver prints, but she also tried other techniques, such as large-format diazotypes, colour photography and video.

Woodman’s photographs explore gender, representation, sexuality and body. Her production includes several self-portraits, using herself and her friends as models. The figures are often placed behind furniture and other interior elements; occasionally, the images are blurred in such a way that their identity is hidden from the viewer. The intimate nature of the subject matter is enhanced by the small formats. Woodman worked in unusual settings such as derelict buildings, using mirrors and glass to evoke surrealist and occasionally claustrophobic moods.

Photography from the Moderna Museet Collection

Alongside the exhibition, Moderna Museet presents a selection of photography from the same period from its collection, to show Francesca Woodman in context.

In Francesca Woodman’s active years in the late 1970s and early 1980s, photography was in a period of transition. Many photographers who had worked with classic black and white photography were experimenting with other forms and were pushing the documentary tradition towards more subjective and surrealist projects.

The United States paved the way in this development, and when many started working more professionally with photography, it was institutionalized. This shift in the field eventually spread to Europe. Major photographic exhibitions were held at The Museum of Modern Art in New York, featuring artists such as Diane Arbus, Robert Frank, and Lee Friedlander, all of whom were influential to many younger photographers.

One of Francesca Woodman’s teachers was Aaron Siskind. His photography is often compared to that of Harry Callahan, since both were active for many years as teachers at the Institute of Design at the Illinois Institute of Technology in Chicago, and later at the Rhode Island School of Design in Providence. Another figure in American post-war photography is Minor White, who also had influence as a teacher. White wrote about and taught methods for understanding and interpreting photographs.

New Topographics. Photographs of a Man-Altered Landscape (1975) was a significant exhibition. It was held at the International Museum of Photography at George Eastman House in Rochester and one of the featured artists was Lewis Baltz. Other notable photographers in the new American wave were personalities as diverse as Robert Mapplethorpe, Melissa Shook, and Jerry Uelsmann.

But it was also then, from 1977 forward, that Cindy Sherman started working on her break-out series Untitled Film Stills. Sherman is an artist of the postmodern generation, and it is not known if Woodman had been aware of the so-called Pictures Generation. Duane Michals stood for a more conceptual approach. He was one of the photographers who we know interested Woodman.

Public Opening Friday 4 September at 5–8 pm
At 6.30 pm welcome address by Daniel Birnbaum, Museum Director, and Ann-Sofi Noring, Co-Director. Introduction by Curator Anna Tellgren.
Due to popular demand, the exhibition will be open from 5pm.
Moderna Bar is open from 5 pm. Admission free.