Early Works. This exhibition will present a unique selection of vintage prints and a recent edition of these two series 'Magie der Schiene' and 'Das Auge der Liebe', showcased this Fall by the publication of the book by Sturm & Drang editions. 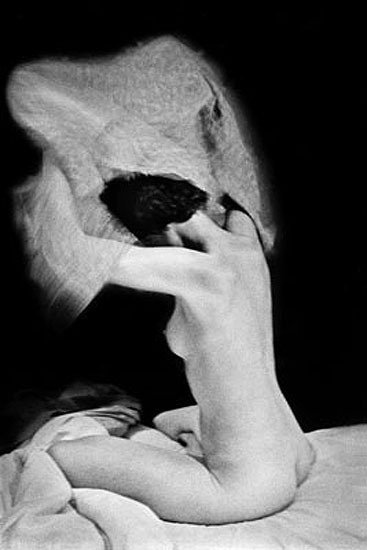 Magie der Schiene (the magic of the rail) is René Groebli’s first book, self-published in 1949. Then only 22, he was beginning his career as a photographer. Traveling regularly outside Switzerland, he took the excuse of a ride on the Paris-Basel Express to achieve this personal work. With an extremely bold style, where the influence of the Bauhaus, the New Objectivity and the Design School in Zurich can be felt, Groebli creates a deeply personal series. Through the post-war Paris suburbs and the French countryside, René Groebli went from the driver’s cab to the intimacy of a wagon, shooted tunnel entrances or the moving tracks of power lines, he photographed railway workers and locomotives launched at full steam. Playing with grain, blur and contrast, and applying a methodical exploration of his subject, René Groebli manages to convey the speed and noise of the train, the hardness of the metal and the smell of coal, delivering an experimental and radical work from single theme. From this formal and rigorous aesthetic he made a rare book, a precise selection of 14 photographs accompanied by a poem by Albert Ehrismann, and this exercise in style, exceptional for that time, immediately earned recognition to its author. Published in German and English with only 1000 copies, recently celebrated by Martin Parr in his Photobook and still sought after by collectors, Magie der Schiene is a landmark in the history of photography.

With a different approach, which announces the stylistic freedom that the photographer exercised throughout his whole career, Das Auge der Liebe (The Eye of Love) traces the honeymoon of René Groebli and his wife, Rita, in the early 50s. The couple were married in 1951, but lack of money and time forced them to delay their honeymoon. Three years later, they finally went to Paris to celebrate their love and stayed in a small hotel in Montparnasse. The photographer took over 300 pictures, with a Rolleiflex and a Leica. The book, published in 1954, retains only 25 photographs, a precise selection made by René and Rita. In a soft and delicate black and white, the photographer reinvents nude and reveals the legs, the breasts, the body of his wife but also her face, her hands and the decor of their story. In this modest hotel room of post-war France, he found lace curtains with cherubs, an iron bed and flower wallpaper, yet a blooming scenery for their novice love. In those times, René Groebli’s sensual vision of conjugal love was called pornography by the Zurich local newspaper. For us it is an erotic and sensitive poem: the photographer let us enter the bedroom and this intimacy offered through the camera lens is the most beautiful evidence of his love.

This exhibition will present a unique selection of vintage prints and a recent edition of these two series, showcased this Fall by the publication of the book René Groebli, Early Works by Sturm & Drang editions.