GesammttkkunnsttMeshuggahhLaandtttt. For the exhibition the artist present his early video works, stuffed animal sculptures, paintings, installations, and book scores alongside other works that have rarely been shown before. 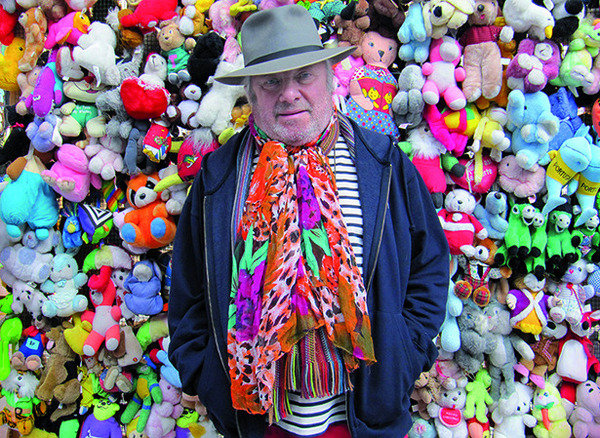 Kunsthalle Wien and Witte de With Center for Contemporary Art are pleased to present Charlemagne Palestine. GesammttkkunnsttMeshuggahhLaandtttt—an exhibition on the musician, composer, performer and visual artist Charlemagne Palestine including his early video works, stuffed animal sculptures, paintings, installations, and book scores alongside other works that have rarely been shown before.

Conceived as a Gesamtkunstwerk in itself, the exhibition at Kunsthalle Wien Karlsplatz will present works ranging from several decades in an all-over environment. One of the core pieces, as in any of Palestine’s exhibitions, will be a piano—a Bösendorfer Imperial—fully covered with stuffed animals, the fetish objects that accompany the artist everywhere he goes. This will also serve as the setting for two performances.

Since the end of the 1960′s, Palestine has executed and performed many provocative, unusual, evocative works and happenings. In his early years, he collaborated with choreographer Simone Forti and artists Tony Conrad and Richard Serra, and performed alongside avant-garde artist La Monte Young and composers Terry Riley, Philip Glass and Steve Reich. Nevertheless, Palestine always resisted being labelled as a minimalist, opting instead for the term “maximalist.” In the 1970s, he produced a seminal body of videos consisting of performances made with and for the camera. In these video works, the artist creates an outward articulation of his own internal state of mind by chanting hypnotically, running hysterically, worshipping teddy bears, and drinking cognac. After years of these intense ritualistic, shamanistic music compositions and performances, his desire to develop visual works began to overshadow his concerns for music. The body of works he produced in the following three decades is therefore marked by the use of stuffed animals that are regarded as shamanic totems and inhabit his paintings, sculptures and installations.

Charlemagne Palestine (b. 1943) lives and works in Brussels. He has released more than 20 solo albums and has performed all around the world in the last 40 years. His work has been exhibited internationally at public and private institutions including: the Venice Biennale, Italy; the Whitney Museum of American Art, New York; the Museum of Modern Art, New York; Moderna Museet, Stockholm; Kunsthalle, Basel, Switzerland; the Long Beach Museum of Art; the Museum of Contemporary Art, Houston; Palais des Beaux-Arts, Bruxelles; Stedelijk Museum, Amsterdam; Documenta 8, Kassel; the Walker Art center, Minneapolis; the Art Institute of Chicago; Centre d’Art Contemporain, Geneva; Musée d’Art Contemporain, Montreal; and Wiels, Brussels. In 2014, he participated in the Whitney Biennial and performed with Simone Forti at MoMA in New York and at the Louvre in Paris.