An exhibition in which Greenwood will premiere the complete, recently re-performed and newly mastered archive of Tracy + the Plastics' actions alongside new work in video and sculpture. Contemporary a selection of Rossi's enigmatic graphite and colored pencil drawings from the late 1960s and her meticulously rendered reverse paintings on Plexiglas from the early 1970s. 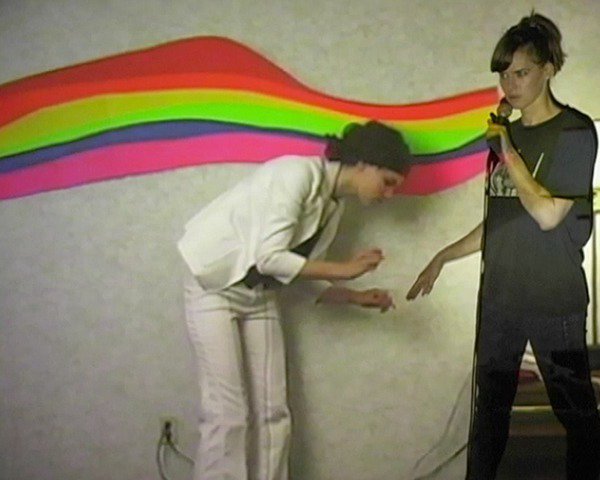 co-curated by Johanna Burton, Keith Haring Director and Curator of Education and Public Engagement, the New Museum, and Stephanie Snyder, John and Anne Hauberg Curator and Director, the Douglas F. Cooley Memorial Art Gallery, Reed College, Portland, Oregon, with Sara O'Keeffe, Assistant Curator, the New Museum. An earlier iteration of this project, Stacy, was presented at the Douglas F. Cooley Memorial Art Gallery in the summer and fall of 2014 and was curated by Snyder.

Wynne Greenwood works across video, performance, music, and sculpture to explore the ways in which a single queer “self” may be pluralized and mobilized to fluidly embody different subjectivities and personae.

Infusing temporarily constructed, collective spaces with humor and intimacy, Greenwood is widely known for her work as Tracy + the Plastics, in which she plays all three parts in an all-girl band. As Tracy + the Plastics, Greenwood performed live as vocalist Tracy, accompanied by videos of herself portraying backup singers Nikki and Cola, and toured across the country from 1999 until the project’s end in 2006.

Naming a new, yet-to-be-imagined character orbiting beyond the Plastics’ cosmology, “Kelly” is an exhibition and a six-month residency at the New Museum in which Greenwood will premiere the complete, recently re-performed and newly mastered archive of Tracy + the Plastics’ performances. Bringing this archive into dialogue with more recent work exploring the artist’s interest in what she has called “culture healing,” “Kelly” will consider the poetics of the pause while mining electric gaps of meaning in conversation and offering possibilities for feminist, queer, and other experimental models of collaboration and dialogue. Greenwood’s residency will include a series of readings, panels, and performances that explore the exhibition’s themes of language and music, with special guests to be announced. In conjunction with the exhibition, material from the historic New Museum exhibitions “Homo Video: Where We Are Now” (1986–87) and “Bad Girls” (1994) will be on view in the Museum’s Resource Center.

A comprehensive catalogue, copublished by the Cooley Gallery and the New Museum, and designed by Heather Watkins, will accompany the exhibition. The book contains texts, imagery, ephemera, and performance transcriptions, with contributions by Johanna Burton, Wynne Greenwood, Sara Jaffe, Emily Roysdon, and Stephanie Snyder.

“Kelly” is co-curated by Johanna Burton, Keith Haring Director and Curator of Education and Public Engagement at the New Museum, and Stephanie Snyder, John and Anne Hauberg Curator and Director of the Douglas F. Cooley Memorial Art Gallery, Reed College, Portland, Oregon, with Sara O’Keeffe, Assistant Curator, New Museum. An earlier iteration of this project, “Stacy,” was presented at the Cooley Gallery in the summer and fall of 2014 and was curated by Snyder.

The exhibition presents a selection of Barbara Rossi’s enigmatic graphite and colored pencil drawings from the late 1960s and her meticulously rendered reverse paintings on Plexiglas from the early 1970s.

Rossi first exhibited her work in late-1960s Chicago where she became associated with the Chicago Imagists, a group of young artists known for their shared interest in non-Western and popular imagery, their pursuit of vivid and distorted figurative work, and their fondness for comic gags or puns. Rossi’s disorienting compositions, however, remain idiosyncratic even among an eclectic set of peers.

Beginning with the graphite drawings presented in the exhibition, Rossi turned inward to find a visual language independent of contemporary tendencies and art historical traditions. By the rules of a self-devised method, she started each work without any compositional plan and adopted an open and introspective process that allowed her “magic drawings” to emerge, unconsciously, through one form at a time. In these works, sporadic figurative suggestions countered Rossi’s drifting morphology and eventually transformed her wandering lines into mischievous, psychedelic portraits.

The baroque characters that populate Rossi’s reverse Plexiglas paintings appear as bodies depicted from the inside out, churning with knobs and bulges that suggest folds of skin or mounds of flesh. Their dynamic contours seem to elaborate the forms of Rossi’s improvised “magic drawings” but developed from her printmaking studies and many preparatory compositions, which she calls her “sweat drawings.” In her reverse paintings on Plexiglas, Rossi applied precise lines and uniform fields of color to the back of the panel in a technique that does not admit revision or overpainting. Channeling her dedication to craft and precision, she embellished the surfaces of these works with beaded constellations of paint whose pointillist shadows are cast through the Plexiglas to underscore the reverse painting method. Sparkling with texture, some of Rossi’s forms twist into kaleidoscopic silhouettes and contort with prolonged viewing, while others introduce more stable, angular figures that highlight her graphic sensibility. In contrast to the cartoonlike antics of these works, however, Rossi’s fastidious approaches to composition and technique emerged from her practice of intense visual observation, her interest in vernacular devotional images, and her appreciation of art as a conduit of complex mental states.

“Barbara Rossi: Poor Traits” marks Rossi’s first museum exhibition in New York as well as the most significant presentation of her work since the early 1990s.