The exhibition revolves around the Indonesian publishing house of the same name, which thrived in the 1960s. The artist intertwines its history with an exploration of the social and political changes in his native Indonesia during Magic Centre's active yars. 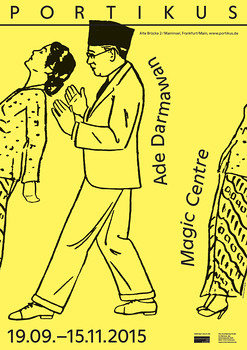 The first title published by Magic Centre in 1965 that caught my attention was ‘bagaimana mendjadi kaja’ (“How to Be Rich”), originally written by Marvin Small. I was particularly drawn to the publishing house because of my interest in the era of social change in the 1960s, when Indonesia was in transition after independence and inundated with nationalistic propaganda by the government. Magic Centre mostly published translated books by American and European authors that would nowadays be classified as ‘motivational.’ These tracts illustrate the hidden history of how the ideology of capitalism was introduced to Indonesia in the early days of the republic. Over the past three years, I have collected more than thirty books by Magic Centre at flea markets in several cities, which I will bring to Portikus as part of my exhibition in Frankfurt.”
–Ade Darmawan

Ade Darmawan’s exhibition Magic Centre at Portikus, his first solo show at an art institution in Germany, revolves around the Indonesian publishing house of the same name, which thrived in the 1960s.

The artist intertwines its history with an exploration of the social and political changes in his native Indonesia during Magic Centre’s active years. From the proclamation of independence in 1945 to the attempted coup in 1965 and the massacres of civilians at the hands of the military under General Suharto that followed, Indonesia’s history was shaped by political instability and tensions between communist and Islamist factions as well as the nationalist propaganda of its longtime president Sukarno. Meanwhile, the economy grew, the country’s citizens commanded increasing purchasing power, and Indonesia began to attract investors and foreign corporations. That is the point Ade Darmawan’s Magic Centre homes in on. The publishing house built its reputation on literature that promised to help the reader improve his or her intellectual abilities. Self improvement, influencing others, character building, the art of business, and successful life were crucial themes in the publisher’s catalogue, which, in later years, consisted mostly of translations of American titles.

The books proffered “answers” to an audience hoping to lead a fulfilled life and master the challenges of modern capitalism. They reflect the production and dissemination of knowledge and throw the characteristic ideological fault lines of a society undergoing profound change into sharp relief. For his exhibition at Portikus, Ade Darmawan works with the contents of the books published by Magic Centre he has collected over the years, arranging them with other found objects. The installation resembles a booth at a trade fair proposing to revive the publishing company.

Ade Darmawan (b. 1974) is an artist, curator, and a founding member of the Indonesian artists’ collective ruangrupa, which uses visual art to study sociocultural trends in urban society. He studied at the Graphic Art Department of the Indonesia Art Institute (I.S.I.). A year after his first solo show at the Cemeti Contemporary Art Gallery, Yogyakarta, in 1997, Darmawan moved to Amsterdam for a two-year residency at the Rijksakademie van beeldende kunsten. He lives and works in Jakarta.