The Roads of War

The exhibition is a photo chronicle, which comprises photographs, taken by war correspondents on the way of the Red Army across the Soviet Union and Europe. From the walls of Moscow and the streets and squares of Leningrad the roads of war lead. 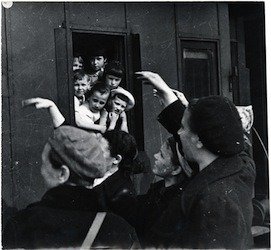 The State Museum and Exhibition Center ROSPHOTO presents an exhibition of photographs by Soviet war correspondents from the collection of ROSPHOTO.

The display which is titled The Roads of War includes the works of the celebrated Russian photographers Emmanuel Yevzirikhin, Boris Kudoyarov and Ivan Shagin. It also features the works of less renowned photojournalists – Boris Pushkin, Jean Berland, Alexander Ditlov, Sergei Loskutov, Semyon Kolonin, Yefim Kopyt and Y. Pyasetsky and Y. Tabarovsky. The latter two names have yet to be re-written into the history of Russian photography.

The Roads of War is a photo chronicle, which comprises photographs, taken by war correspondents on the way of the Red Army across the Soviet Union and Europe. From the walls of Moscow and the streets and squares of Leningrad the roads of war lead the viewers together with the depicted characters to Bryansk and Pskov and via Byelorussia, Ukraine, Latvia and Poland to Germany.

The exhibition puts the spotlight on the wartime’s everyday life with its loaded marches and rest halts, attacks and river crossings, tragedies of partings and joys of brief meetings. The displayed photographs show neither ostentatious heroism nor horrors of war, but depict war’s daily routine from the point of view of common soldiers and civilians, where life is represented as a continuous travel along the road of hardships which leads every man to his own fate and to victory.

Each of the abovementioned war correspondents developed the subject of the road in his own way. A 1941 picture by Boris Kudoyarov depicts a marching group of Komsomol members from the Kirov Plant preparing to defend Leningrad. Serious faces of young men in civilian clothes with rifles behind their backs on the background of a familiar city landscape create an expressive and meaningful picture which bonds the past, present and future of all depicted characters.

Quite another road is represented in the photograph Crossing over the River Don by Emmanuel Yevzirikhin. The eye of a viewer follows the road away from the combat zone with a burnt-out tank and a sentry into the distance and post-war silence; this road perspective becomes a metaphor of movement towards the coming victory and the main compositional idea of the exhibition.

The parting and meeting scenes contribute to the development of the exhibition’s concept too. In the displayed photos we can see people parting with soldiers going to the front, and with children who are evacuated from Leningrad. Together with photographers and depicted characters we relive the moments where they meet the residents of liberated cities and villages, prisoners of concentration camps, dwellers of Berlin and soldiers of the Allied forces at the River Elbe.

Along with such masterpieces of wartime photography as The Rout of the Nazi Troops near Moscow and A Meeting in a Liberated Village by Ivan Shagin, We Shall Fight to the Bitter End by Emmanuel Yevzirikhin, Salvo Fire at the Enemy Airplanes by Boris Kudoyarov the visitors to the event will be able to see lesser-known artworks. The latter pictures include an important photograph by Y. Pyasetsky First Aircraft Built on Personal Savings of the Collective Farmer F. Golovaty which was taken in 1944 in Saratov. The picture unveils the story of the Yakovlev Yak-1 fighter which was purchased by the farmer Ferapont Golovaty for 100 000 roubles at the Saratov Aircraft Factory. Golovaty had got that sum from the sale of two hundred kilograms of honey. In 1943 the aircraft was gifted to Major of the Guards B. Yeryomin. During its service the aircraft had never been shot down and when its operating life ended in 1944 the aircraft was transported to Saratov and installed at a city square.

The majority of photographs on view are original small-size wartime prints meant for the publication in different periodicals of the age. The fact that the displayed works are of different sizes means that they have been framed by their creators or editors. The exhibition also includes original photographs by Ivan Shagin and Emmanuel Yevzirikhin printed after WWII, and modern photographs printed from original negatives from the archive of photojournalist Sergei Loskutov.