Interventions in the Architecture. Christian Boltanski and Gustav Metzger gave their views on the building's monumental architecture in their projects "Resistance" (1993) and "Travertine / Judenpech" (1999), which told stories of courageous resistance and painful expulsion. 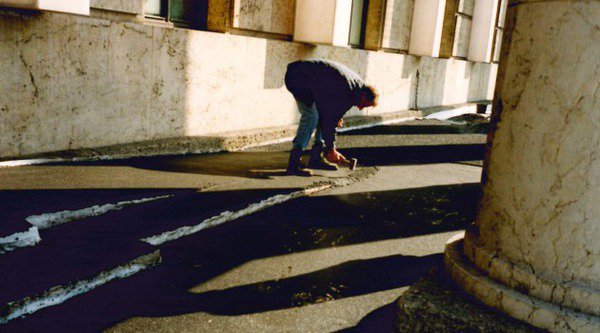 The new presentation in the Archive Gallery focuses on interventions in the architecture of the building, which opened in 1937 as the "House of German Art", and the treatment of its façade.

Christian Boltanski and Gustav Metzger gave their views on the building's monumental architecture in their projects "Résistance" (1993) and "Travertine / Judenpech" (1999), which told stories of courageous resistance and painful expulsion. The two projects were the first in a series of artistic interventions on the building's façade and exterior space. Two decades after their creation, they will be realized once again. This reactivation expresses Haus der Kunst's understanding of its archive as a dynamic repository for information and artistic ideas.

This installation was first on view in Haus der Kunst in winter 1993/1994. It was part of the group exhibition "Widerstand - Denkbilder für die Zukunft" (Resistance - Thought Pictures for the Future), which was jointly developed by Staatsgalerie moderner Kunst and Haus der Kunst, and with which the two institutions took a stand against growing nationalist, anti-Semitic and xenophobic tendencies.

Christian Boltanski's contribution consisted of a poster installation on the building's facade. The pictures depicted the eyes of former members of the anti-fascist movement "Rote Kapelle". This network of resistance fighters consisted of more than 150 men and women who had organized themselves into independent groups. Their struggle against Hitler and his regime of terror ranged from the distribution of leaflets and stickers to contact with Soviet intelligence services and the American embassy, even to espionage.

The name "Rote Kapelle" was coined by the Gestapo. It derives from the Secret Service term "pianist" for a radio operator; a "chapel" refers to a group of these. More than one hundred members of the so-called Rote Kapelle were arrested and sentenced to death or prison terms between autumn 1942 and spring 1943. After 1945, postwar ideologies diverged. The BRD distanced itself from the members of the Rote Kapelle, discrediting them as communist spies and traitors; in the GDR the group was instrumentalized as communist heroes against fascism. After reunification, the image of the Rote Kapelle was revised, and members regained their individual biographies. With the eyes in "Résistance", Boltanski commemorates those who opposed the National Socialist regime at the risk of their own lives.

In March 1999, Gustav Metzger coated the 105-meter colonnade running along Haus der Kunst's facade with tar. He named the installation "Travertine / Judenpech". Since antiquity, Judenpech had been a term for asphalt. Travertine was a favored material for large National Socialist structures, such as the National Socialist Party Rally Grounds in Nuremberg. This connection intrigued the artist.

The installation reflects Metzer's own traumatic experiences under the National Socialist regime and establishes a relationship between Hitler's megalomania and human degradation. Gustav Metzger was born in Nuremberg in 1926 as the son of Orthodox Jews and survived the Holocaust thanks to the "Kindertransport", which brought him to London in 1939. He never saw his parents again, a trauma that influenced both his life and his art.

"Travertine / Judenpech" was created as part of the group exhibition "Dream City", organized by the Kunstraum München, the Kunstverein München, the Villa Stuck and Siemens Kulturprogramm. It was Gustav Metzger's express wish to place his installation at the main entrance of Haus der Kunst. When Haus der Kunst once again invited him to cooperate in an intervention, the artist made a conscious decision to repeat the installation.

Both interventions face the city's bustling urban space. They expand on the dynamic concept of the Archive Gallery, whose exhibits are repositioned, also spatially, each year in collaborations with contemporary artists.

The new exhibition opening on September 17, 2015 presents a selection of drawings from the 1960s. At this time proposals to remove the columns along the street-facing facade and the steps in front of Haus der Kunst were under discussion. Urban planning arguments in support of this included the expansion of the city's northern ring road. The architectural committee ‘Landesbaukunst-Ausschuss' even proposed a complete demolition of the Haus. Its members were distressed that the building had emerged from a period of ideological abuse (1937-1944) with its exterior largely unscathed, and wanted to obliterate it from the cityscape even though the Haus had become an internationally renowned venue for modern and contemporary art since 1955.

Since the mid-1990s, Haus der Kunst has regularly invited artists to intervene in the building's architecture. Most artists have focused on characteristic elements such as the facade and the Middle Hall (the former Hall of Honor). These contributions have established impressive new narratives linking memory and contemporary art.