Painting into the Fold: Griffa came to prominence in the late 1960s for his intense and highly concentrated paintings which are reduced to their essential components: canvas, colours and brushstrokes. Papp's recent sculptural works consist of the same repeated components; each is made by hand in unfired clay, each is approximately the same size. 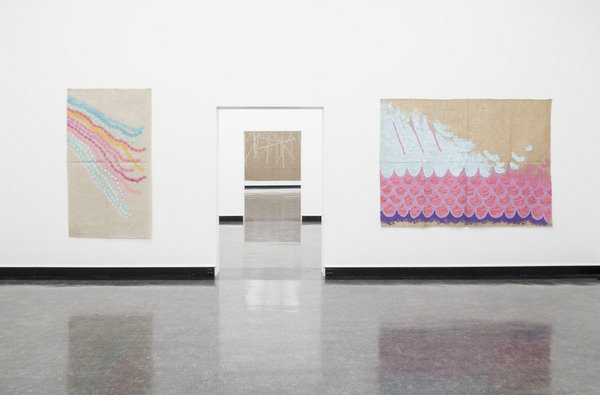 Giorgio Griffa
Painting into the Fold

One of the most radical and articulate artists of the neo-avant-garde working in Italy today, Giorgio Griffa came to prominence in the late 1960s for his intense and highly concentrated paintings which are reduced to their essential components: canvas, colours and brushstrokes.

Emerging at a time when many of his peers in the Italian art world were moving towards more sculptural, object-based practices – most notably those associated with the Arte Povera movement whom Griffa worked alongside in Turin – his commitment to painting as both an aesthetic endeavor and an exploration of the intelligent, active nature of materials and matter, has remained the focus of his own work for nearly five decades.

Griffa’s painting transcribes an idea of rhythm, sequence and the repetition of minimal gestures onto unprimed and unstretched, folded canvases. Working horizontally on the studio floor, the various and often primitive marks, lines and motifs are applied with a brush or sponge in a manner that is more reminiscent of calligraphy or design. Rather than the paint being built up or held on the surface of the canvas, it instead soaks into the fibres of the raw fabric, staining it, saturating it and transforming it. It is a painterly language that has retained an extraordinary consistency for more than 40 years.

In 1993 Griffa began an ongoing series, Canone Aureo, in which he depicted the ‘golden number’. Painted at various scales, and in various colours and patterns, it is treated much like the other more or less abstracted signs and symbols that Griffa employs. First defined by Euclid in the third century BC, it has captivated mathematicians, philosophers, artists and architects for thousands of years. Infinite in its decimal manifestation, no matter how many decimal points one adds the number never increases. Instead it spirals in on itself, collapsing into smaller and smaller spaces of reality – a fold or fissure opening into the unknown and the unknowable.

Griffa has likened it to the myth of Orpheus, writing: “Orpheus descended into Hades, he physically entered the unknown… And we are not talking about superstition here. I would say that we are dealing rather with knowledge arrived at indirectly, by metaphor, by analogy” Griffa’s work, then, might be seen as an attempt to approach these universal and essential spaces of knowledge and knowing. As he writes: “Painting itself is provisional knowledge… Every mark of the brush is a real phenomenon, every piece of canvas is a piece of reality.”

This exhibition is a collaboration with CAC - Centre d'Art Contemporain, Geneve, Serralves Museum, Porto and Fondazione Giuliani, Rome, It is accompanied by a catalogue published by Mousse Publishing, including a complete chronology of the artist's work and life, and newly commissioned texts by Andrea Bellini, Martin Clark, Hans Ulrich Obrist, Chris Dercon and Suzanne Cotter.

Romanian artist Anna-Bella Papp’s recent sculptural works consist of the same repeated components; each is made by hand in unfired clay, each is approximately the same size (the size of a sheet of A4 paper), and they are invariably shown as a group, lying on a table or a pedestal so one can view them from above.

The small clay tablets appear on the face of it to be rigorously minimalistic, produced according to these modest but strict sculptural resources. Within this restricted framework, though, there is nevertheless a wide range of formal possibilities, which Papp explores anew in each and every work. The sculptures exhibit innumerable formal variations, where even the smallest changes in volume, materiality, composition, colour and surface take on a defining meaning.

Viewed from above the sculptures become pictures. Various inscriptions, impressions and drawings are imprinted into the surface of the clay, and the motifs range from abstract ornament to more figurative depictions, or even something recalling an architectural sketch. In addition to the meticulously thought-out inscriptions on the surface of the clay, the properties of the material also play an important role in the final work. The surface holds the traces of the shaping by the hand, captured and frozen in the material. Different clays also have different mineral compositions, which means that some sculptures appear solid, others porous; the surfaces alternately rough, smooth or dense, and varying in colour from pale sand to dark or reddish greys. In some of the works different clays are combined, complicating the notion of image and object, structure and surface, interior and exterior.

Despite their immediacy, there is something timeless and enduring about Papp’s sculptures, displayed like archaeological remains in a historical museum. Reliefs, inscriptions and symbols in clay are among the oldest preserved manmade objects. At the same time the material itself, and the intimate format, gives the sculptures the look of something provisional, sketch-like and tentative, as if they might be models for larger works, or fragments perhaps. That the clay is unfired makes the sculptures even more vulnerable and brittle. After a long drying process the final composition is fixed and perfected, preserved in the material for posterity. At the same time, though, one knows that just by adding enough moisture, the surface can be wiped blank and the expression changed entirely.

In NO.5 Bergen Kunsthall revisits selected artworks and exhibitions, previously presented elsewhere in the world. Initiated in response to the increasing acceleration of both the production and reception of art, NO.5 provides an opportunity to slow down, focus on, and look again at particular works, exhibitions or fragments of exhibitions. Bergen Kunsthall will commission a new critical text to accompany each of these re-presentations. This exhibition has been shown earlier at Modern Art in London (“Anna-Bella Papp”, 27 March – 18 April 2015). For this exhibition Bergen Kunsthall has commissioned a new text by Andreas Arndt.