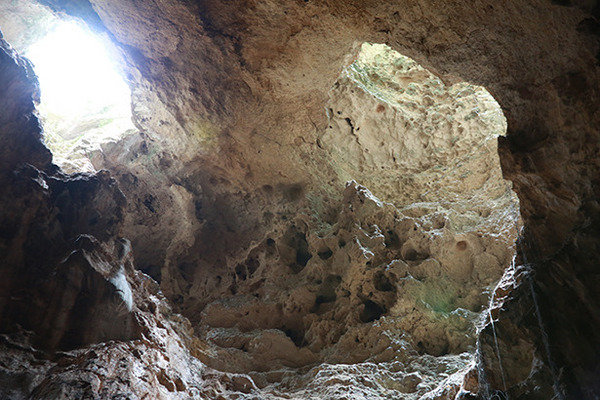 Puerto Rican Light (Cueva Vientos) is the newest iteration in a series of system-based sculptures by Allora & Calzadilla. Central to this commission is a solar energy converter that captures and stores sunlight, which is then used to power Dan Flavin’s Puerto Rican Light (to Jeanie Blake) (1965). For Dia’s commission, the artists ambitiously expand this sculptural gesture by installing Puerto Rican Light (Cueva Vientos) in a cave in Puerto Rico. The journey is part of the viewer’s experience, similar to other Dia sites, including Walter De Maria’s The Lightning Field (1977) in New Mexico and Robert Smithson’s Spiral Jetty (1970) in Utah.

Allora & Calzadilla address light (both natural and electrical), as well as its representations and meanings throughout modern history, within an environment that predates and may survive human civilization. Reminiscent of myths associated with the symbolism of the cave, Puerto Rican Light (Cueva Vientos) also directly addresses this natural setting as the scene of the first human artistic manifestations, which appeared in the form of cave paintings thousands of years ago.

“Puerto Rican Light (Cueva Vientos) demonstrates Dia’s commitment to long-term commissions, which is at the center of our mission,” said Jessica Morgan, Director, Dia Art Foundation. “It has been a privilege to work with Allora & Calzadilla in realizing this work, which explores the connections between body, space, time, energy, and environment.”

Co-curated by Yasmil Raymond and Manuel Cirauqui, Puerto Rican Light (Cueva Vientos) is Dia’s first long-term installation outside the continental United States since Joseph Beuys’s 7000 Eichen (7000 Oaks) in Kassel, Germany, in 1982. This project is informed by Dia’s commitment to Flavin, a core artist in Dia’s collection. Major presentations of Flavin’s light sculptures are on view at Dia:Beacon (Beacon, New York) and at the Dan Flavin Art Institute (Bridgehampton, New York).

Puerto Rican Light (Cueva Vientos) is organized in collaboration with Para la Naturaleza, the nonprofit unit of the Conservation Trust of Puerto Rico. A special thanks to the Museo de Arte de Ponce for their partnership.

Guided visits for small groups are available Wednesday through Sunday at noon. Visits include a moderate hike and last approximately two hours. Arrangements will be made for school and special groups.

The work is situated between Guayanilla and Peñuelas, Puerto Rico.