This land is my land. This land is your land. A series of new works in various media. The artist uses the so - called Canadian Tobacco Belt as a point of departure for questions about identity, nationalism and colonialism. SoundImageCulture presents large scale works by 6 different artists. 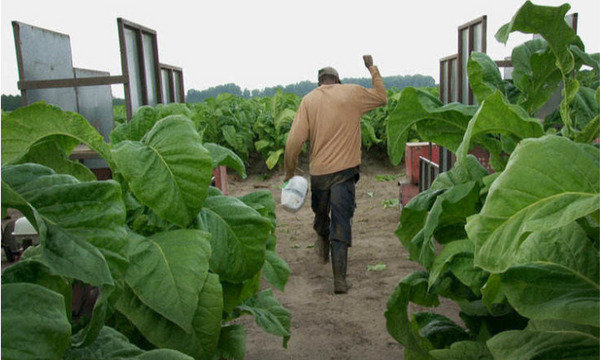 The exhibition This land is my land. This land is your land. presents a series of new works in various media. Pieter Geenen uses the so -­‐ called Canadian Tobacco Belt as a point of departure for asking questions about concepts such as migration, land, identity, nationalism and colonialism.
In the first half of the twentieth century, this particular part of Canada became home to a large number of European migrants, especially people from the Flemish -­‐ speaking part of Belgium, who embarked on a new life as tobacco farmers.
Today the younger generations have adapted to the New World, a world created at the expense of the native First Nations . Since those early days, the local labourers lost interest in the hard work of tobacco farming , and they have been replaced by foreign workers from Central America and the Caribbeans.

Geenen uses the story of tobacco — its discovery by Europeans, its cultivation outside its original habitat, and the economic decline of the industry — as a metaphor for the concept of colonialism and the migration wave that followed, as well as for the potential lo ss of identity. Using the tobacco plant as a vehicle, the artist focuses on the special socio -­‐ economic reality of the ethnic and cultural groups involved.

In Geenen’s oeuvre, “time” and “space” are concepts that can be compressed and that can shift. “Here ” and “there”, “we” and “they” are vague and mutually exchangeable. When all elements converge in this exhibition, a new, undefined and ambiguous reality results. A reflection on the identity of every individual being that questions both our personal and o ur collective position.

The Brussels workspace SoundImageCulture (SIC) coaches audio -­‐ visual art projects on the interface between anthropology and the visual arts. Every year, the various workshops in which professional artists and thinkers guide and advise the participants, result in some ten exciting film projects. It strikes us that in the past years the number of multiscreen works and installations has increased exponentially.

For the first time, Argos presents six of these large -­‐ scale works. At the same time, SIC launches its online platform, where all the audio -­‐ visual works that were created in the period 2007 -­‐ 2015 can be viewed.
SoundImageCulture – Installations presents work by Piero Bisello & Maxime Le Bon , Sander Tas and Danja Cauwbergs, Margaux Schwarz, Eleni Kamma, Davide Tidoni and Eva la Cour.