A touring exhibition that provides a vital overview of the most exciting contemporary art produced in UK. This year, it tours the work of over 40 artists to four cities: Leeds, Edinburgh, Norwich and Southampton. 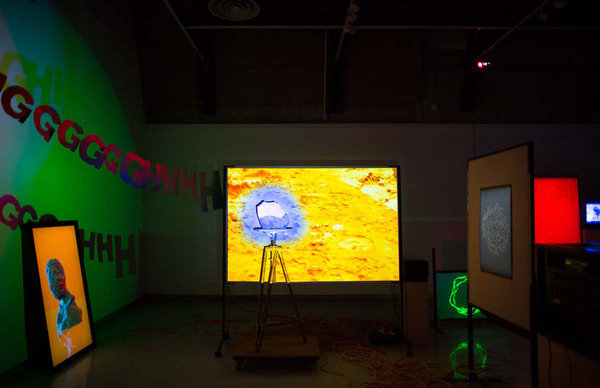 The British Art Show is a national touring exhibition that provides a vital overview of some of the most exciting contemporary art produced in the UK. Organised by Hayward Touring at Southbank Centre, London, and taking place every five years, it introduces a broad public to a new generation of artists. After opening in Leeds Art Gallery, British Art Show 8 will tour to multiple venues across Edinburgh, Norwich and Southampton over the course of 15 months.

Curated by Anna Colin and Lydia Yee, British Art Show 8 features the work of 42 artists who have made a significant contribution to art in this country over the past five years. The result of the curators’ research across the UK and beyond is a wide-ranging exhibition that encompasses sculpture, film, video-installation, photography, painting, performance and design. 26 of the artists have created new works especially for the exhibition, making this the most ambitious British Art Show to date.

A central concern of British Art Show 8 is the changing role and status of the object at a time of increasing convergence between the real and the virtual. In response to this condition, artists have developed new ways of thinking about and approaching materiality. While some revisit traditional craft-based skills or make use of industrial techniques, others use data as a starting point for their work, investigating the material conditions of our digital existence. Within the exhibition, ordinary objects—a car, a hard drive or an egg—are considered as archaeological finds or narrative devices. Operating within a complex web of relationships, these objects reveal new ways of being, thinking and acting in the world.

This year, the British Art Show benefits from the exceptional support of Arts Council England’s Strategic Touring Programme which will enable new digital platforms, community engagement and artists’ projects outside the gallery.

Opening Friday 9 October 2015, 5:00pm – 10:00pm
The launch event is part of the city's cultural showcase Leeds Light Night, with festivities taking place throughout the city centre for one night