Painting 2.0: Expression in the Information Age

The exhibition tells the story of painting's adaptation, absorption and transformation of information technologies in Western Europe and the United States since the 1960s. It trace the multi-faceted history of painting and spectacle right up to the ubiquitous digital formats that characterize our present day. With more than 200 works by some 100 artists. 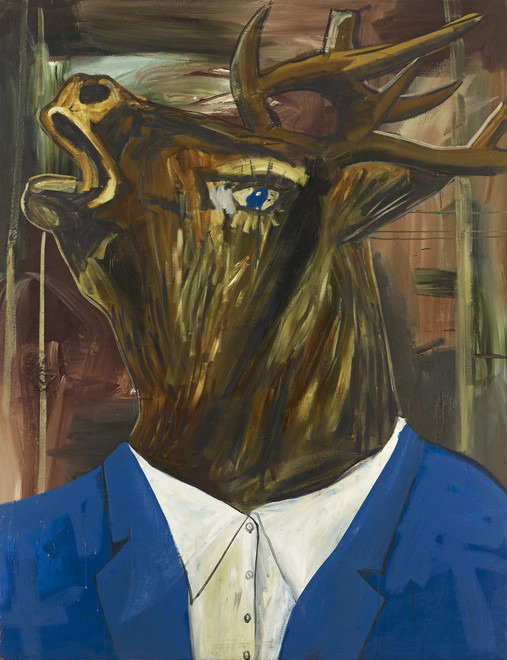 The resurgent interest in contemporary painting in recent years has coincided with an explosion of new digital media and technologies. Contrary to canonical accounts premised on medium-specificity, painting’s most advanced positions since the 1960s have developed in productive friction with contemporaneous forms of mass media and culture. From the rise of television and computers to the Internet revolution, painting has assimilated precisely those cultural and technological developments that were held responsible for its presumed 'death'. Moving far beyond its technical definition as 'oil on canvas', painting during the information age has consistently offered a site for negotiating the challenges of a mediated life-world.

'Painting 2.0: Expression in the Information Age' will be the first exhibition to tell the story of painting’s adaptation, absorption and transformation of information technologies in Western Europe and the United States since the 1960s. Its historical starting point in Pop Art and Nouveau Réalisme’s programmatic appropriation and re-contextualization of commercial imagery precedes the advent of digitalization and the Internet by some thirty years. Painting’s capacity to absorb and transform other media became explicit at the same moment as its legitimacy was fundamentally challenged by cultural forms of mediation which Guy Debord theorizes in his influential critique as 'The Society of the Spectacle' (1967).

A central tactic in painting’s encounter with spectacle is its mobilization of painterly 'expression'. 'Painting 2.0' will demonstrate that since the 1960s the expressive gesture has served as a means of reintegrating the virtual world of the information age into the material domain of the human body indicating the charged border between the human and the technological, as well as the analog and the digital. 'Painting 2.0' will trace the multi-faceted history of painting and spectacle right up to the ubiquitous digital formats that characterize our present day, ranging from the interactive Web 2.0, its social media, to data clouds.

'Painting 2.0' will occupy the entirety of the Museum Brandhorst, with the exception of the upper floor gallery custom-built for Cy Twombly’s 'Lepanto'-cycle. It is the largest and most ambitious temporary exhibition to be organized by the museum since it opened in 2009. Three inter-related sections, each occupying a floor of the museum, will trace three important strands in the development of painting since 1960.
'Gesture and Spectacle' surveys the ways in which gestural techniques were mobilized to combat or 'humanize' spectacle. It presents works in which the painterly mark is used as means to assault, to undermine spectacular forms of commercial media, ranging from Niki de Saint Phalle’s 'Shooting Pictures' or the torn billboardadvertisements of the 'Affichistes' Mimmo Rotella, Jaques Villeglé, and Raymond Hains to painterly strategies that mimic in critical ways the logic of the spectacle, such as Keith Haring’s 'Subway Drawings', Albert Oehlen’s computer-paintings or Monika Baer’s abstractions with banknotes and coins.
'Eccentric Figuration' brings together various aesthetic manifestations of the bodily in painting under the influence of media and spectacle. There is a strong registration of corporeality and a play with mimesis among this group of artists whose forms range from the literally figurative to a visceral mode of abstractly figuring the bodily in and through the material of paint. The 'prosthetic bodies' in Maria Lassnig’s and Lee Lozano’s work, the 'eccentric' mark-making of Cy Twombly and Amy Sillman, the cartoonish exaggerations of William L. Copley and Nicole Eisenman, the anti-heroic bodies in Philip Guston and Kai Althoff’s work – they all testify to the complex entanglement of body, media images, and new technologies since the mid-20th century.
'Social Networks' centers on those ways in which painting represents a 'network society', both through the mobilization of images on canvas and by representing the artist’s life-worlds. Andy Warhol’s 'Factory', the so-called Capitalist Realism of Sigmar Polke, Gerhard Richter, Konrad Lueg and Manfred Kuttner, and, the feminist artists of New York’s A.I.R. Gallery, will be exhibited alongside contemporary artists sometimes referred to as 'network painting' – such as Seth Price or R.H. Quaytman.

'Painting 2.0: Expression in the Information Age' will be accompanied by a comprehensive and richly illustrated catalogue – 320 pages with 350 full color illustrations – including substantial historical essays by the curators Achim Hochdörfer, David Joselit, and Manuela Ammer addressing the three sections of the exhibition as well as shorter statements by influential thinkers on painting’s recent developments including Lynne Cooke, Isabelle Graw, John Kelsey, Tonio Kröner, Wolfram Pichler and Kerstin Stakemeier.

'Painting 2.0: Expression in the Information Age' is a cooperation with mumok – Museum moderner Kunst Stiftung Ludwig Wien. The exhibition will be shown at the mumok from 2 June until 6 November 2016.