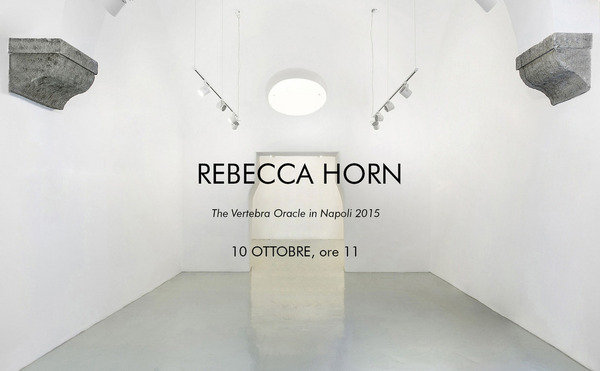 One of the most versatile and inventive artists of our time, Rebecca Horn works across a range of media, including sculpture, installations, performances, painting, film and poetry.
Over the last four decades, she has produced a highly complex oeuvre that is grounded and bound together by an ongoing meditation on metaphysical issues and a deep existential desire.

Rebecca Horn's last exhibit at the Studio Trisorio in Naples was in 2012, when—exactly 10 years after her Spiriti di madreperla installation in Piazza del Plebiscito—she returned with her Capuzzelle exhibit to re-contemplate themes of rebirth and the reciprocity between the dimensions of life and death. The "capuzzelle" (cast iron skulls) have accompanied her work for many years and to many different museums, including institutions in Berlin, New Delhi, Maribor, Moscow, and most recently at La Llotja in Palma de Mallorca.

Her exhibition in Napoli will present sculptures and drawings related to poetry, such as in Vertebra Oracle for the future.
Also on view will be a large-scale sculpture, Revelation of a Tree, which casts branches as moving antennas, the new energy point of the tree.

Rebecca Horn presented her first important performances at the 1972 Documenta 5 in Kassel. Her works have been shown in numerous solo exhibits, including large retrospective showings at the Guggenheim Museum in New York (1993), the Tate Gallery in London (1994), the Nationalgalerie in Berlin (1994), the Martin-Gropius-Bau in Berlin (2006), the Museum of Contemporary Art in Tokyo (2009), and the Centro Cultural Banco do Brasil in Rio de Janeiro and in San Paolo (both 2010). Rebecca Horn has received numerous awards and official recognitions, including the Barnett and Annalee Newman Award (2004), the Praemium Imperiale, (Tokyo) and the Hessischer Kulturpreis (both 2010), and the Grande Médaille des Arts Plastiques (Paris 2011). In 2010, she established the Moontower Foundation. Horn has produced the following films: Der Eintänzer (1978), La Ferdinanda - Sonate für eine Medici Villa (1981), Buster's Bedroom (1990), Cutting Through the Past (1995) and Moon Mirror Journey (2012). In 2008, she directed and designed the set and the costumes for Salvatore Sciarrino's Luci mie traditrici (My Treacherous Eyes) at the Salzburg Festival. In Italy, her installations are part of the permanent collections of the MADRE Museum in Naples and at the Castello di Rivoli.

Opening: Saturday, 10 October, 11 a.m.
Rebecca Horn will be present at the inauguration.