A constellation of music, art, film, and talks independently organized by 36 venues 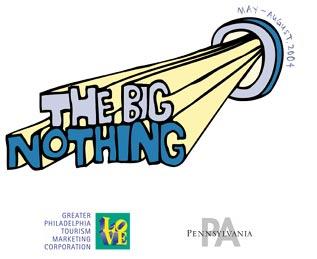 The void, the sublime, the absurd, silence, zero...in short, plenty of nothing fills the
summer, day and night.

''The Big Nothing,'' includes an exhibition on themes of nothing in recent art at the Institute of Contemporary Art, University of Pennsylvania, which initiated this city-wide project.

The Institute of Contemporary Art (ICA) is pleased to announce ''The Big Nothing,'' a major group exhibition exploring themes of nothing and nothingness in contemporary art. Filling both main gallery spaces, the exhibition will include over sixty artists' works from the 1970s to the present. ICA's exhibition also initiates a Philadelphia-wide constellation of music, art, film, and talks independently organized by 36 venues throughout the city. Driven by a core-group of curators and organizers over the past year-from the Philadelphia Museum of Art to the Edgar Allan Poe House to The Fabric Workshop and Museum-the various independently conceived projects will occur throughout the summer all around the city.

The void, the ineffable, the sublime, refusal, nihilism, zero-all are encompassed by ''nothing.'' ICA's first floor gallery will trace a number of distinct takes on the idea. The vacuity or reproducability of consumer image culture can be seen in works by Roe Ethridge and Andy Warhol. Metaphysical nothings-from Zen to an updated American sublime-are evident in works by Jack Goldstein, Heavy Industries and Yayoi Kusama. Yet another section, with works by Louise Lawler, Jutta Koether, and others, conceives of nothing as a kind of refusal or negation. A fourth grouping will document art projects that have sought to close or empty the gallery space. This surprisingly recurrent gesture in contemporary art-Yves Klein, Robert Barry and Michael Asher have all made signature works by removing or displacing art from its normative contexts-will be showcased in photographs, announcement cards, press releases and other ephemera. ICA's upstairs gallery will be devoted entirely to film and video, and will include works by Bernadette Corporation, Dominique Gonzalez-Foerster, Pierre Huyghe, John Smith, Nicolas Guagnini and Karin Schneider, and Charlemagne Palestine among others.

For information on the ICA exhibition and the 36 independently curated projects taking place throughout the city, please visit the web site

Book a hotel package any weekend during the run of ''The Big Nothing'' and enjoy a host of ''nothing'' events, exhibitions, and happenings throughout the city. Ask for the ''Big Nothing'' package