TA retrospective of Bahri Alptekin's practice, bringing together works produced during the two decades either side of the new millennium. Since the early 1990s, Alptekin focused on an artistic production broad in scope. Nkanga is the inaugural artist invited to participate in the new IN SITU programme. 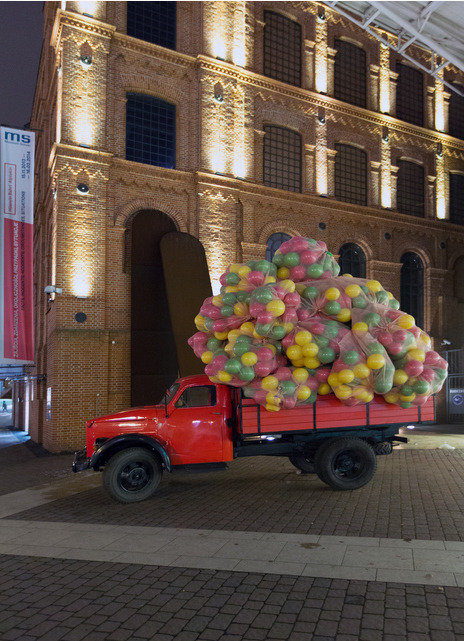 Hüseyin Bahri Alptekin (Izmir, 1957–Istanbul, 2007) was fascinated by the difference between the promise of something and its banal reality. This promise could lie in the name of a cheap hotel offering the experience of a distant place, or in the branding of a mass-produced product unconvincingly simulating luxuriousness or exoticism. Alptekin was an artist that saw the profound effects of global capitalism on the everyday, observing the movement of people and products across geographies, particularly in the period following the collapse of the Soviet Union. He himself was also a traveller, studious of forms of feral capitalism surging from places considered the fringes of western modernity. It is the signifiers and remnants of all this – traces of the burgeoning effects of mobility, trade and image circulation – that Alptekin used as the materials for his art-making, as a means for contemplating what it all represented.

Part of the first generation of Turkish artists considered to be globally active and nationally influential, Hüseyin Bahri Alptekin is considered one of the most significant figures in the established contemporary art scene of Istanbul. The exhibition Democratic luxury is a major retrospective of his practice, bringing together works produced during the two decades either side of the new millennium. Since the early 1990s, Alptekin focused on an artistic production broad in scope, which included photographs, sculptures, installation, neon text, videos and collages. It is ‘plastic art’ reflecting the prosaic material qualities of ‘global junk’ that came with the flow of trans-national free-market capitalism. This dislocation with geography recurs as a thematic strand in much of his practice, analysing how a society’s representations of ‘other’ places conform to our desires and stereotypes.

Democratic luxury aims to take us deeper into the thought-processes of the exhibited works through the inclusion of a selection of studies, drawings and notes from the Alptekin archive. The exhibition will also consider his collaborative initiatives with other artists such as the Bunker Research Group, the Barn Research Group or the Sea Elephant Travel Agency which aspired to organise a ‘floating laboratory’ for artists and thinkers to circumnavigate the Black Sea, developing critical discussions and artistic exchange, all-the-while tracing the route taken by the protagonist in Jules Verne’s novel Kéraban the Inflexible (1883).

Democratic luxury has been developed as a collaboration between M HKA and RAMPA Gallery, Istanbul, with the displays across both venues together forming a major retrospective of the work of Alptekin. The display at RAMPA runs from 02.09.2015 until 14.11.2015.

The IN SITU programme at M HKA is a new programme of medium-scale monographic exhibitions by some of the most significant early- and mid-career artists from around the world working today.

It will focus exclusively on the commissioning of new artworks, as well as foregrounding experimental practices in response to M HKA’s largest and most atypical exhibition space.

The IN SITU programme has been developed by Nav Haq, curator at M HKA.

Otobong Nkanga is the inaugural artist invited to participate in the new IN SITU programme. Through having developed a highly multifaceted artistic practice over the last decade, Antwerp-based artist Otobong Nkanga offers us active proposals for thinking about some of the most urgent issues of the present time. One of her central and ongoing concerns is with the world’s natural resources, particularly the intensity of which the stripping of minerals from the Earth is profoundly connected to the conditions of late capitalism. She makes artworks about the relations between the natural landscape, people and labour, and their exploitation. Nkanga comes to these issues possessing a more composed human tempo, in contrast to the blinding accelerationism of the global capitalist machine.

Otobong Nkanga is fascinated by the notion of what she describes as “shine”. For the artist, this word is for thinking not only about the glimmering surface qualities of natural resources like rare minerals, but also about the desire to be seduced by exotic consumer objects. Glimmer is the German name for the valuable mineral Mica, which is the subject of her installation In Pursuit of Bling (2014). Works such as this look to make explicit the connection between rarification and desire, which is central to the complex networks of supply and demand that define globalisation. Nkanga’s artworks, whether in drawing, performance, sculpture or any other media, are built around a more holistic understanding of place and time, connecting together non-linear fragments of histories, experiences and images. Alongside In Pursuit of Bling, the artist has created a new set of large-scale tapestries, drawings and a carpet for this exhibition. Together, these elements form the setting for a series of performances and participatory actions Nkanga will organise throughout the duration of the exhibition.

Otobong Nkanga lives and works in Antwerp, and has become one of the most prolific artists working internationally today. Her recent exhibitions include the Berlin Biennial (2014), São Paulo Biennial (2014) and the Lyon Biennial (2015).

Bruises and Lustre is the fourth and final chapter in a series of exhibitions: In Pursuit of Bling, 8th Berlin Biennial; Crumbling Through Powdery Air, Portikus (Frankfurt); Comot your Eyes Make I Borrow You Mine, Kadist Foundation (Paris); Bruises and Lustre, M HKA (Antwerp).

Opening: October 15, with performance by Otobong Nkanga at 9pm