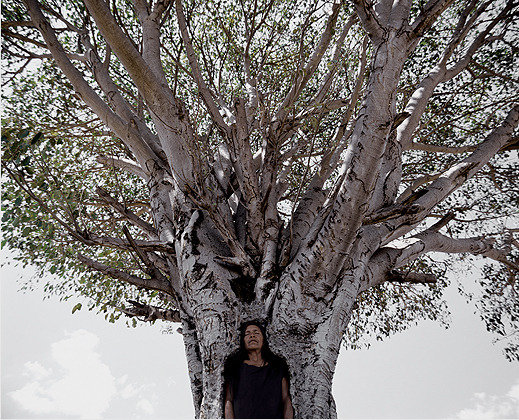 The exhibition was curated by Peter Fischer and Brigitt Bürgi
Assistants: Simone Büsch-Küng and Pascale Keller

The exhibition «About Trees» is interested in trees as a symbol and embodiment of the principles in the contemporary world. The artists allow them to "speak" through their works. In all cultures, since time immemorial, the tree has been seen as a symbol of life in general and as the world tree, and as such is the starting-point for many myths and fairy tales.

The tree can also be seen as an image of a human being: roots, trunk and crown correspond to the feet, the body and the head. Last of all, the tree is a vegetable creature that has a different concept of time from our own. Trees live much longer than humans. Trees can be climbed, but they can also be felled, defeated, exploited, for example as firewood, which is to say that they are a precious raw material and provide energy. And in our contemporary world the tree often stands in for the endangered environment and for the indissoluble connection between man and nature.

For many artists, from Paul Klee to William Kentridge, the tree is also a model for creative processes. Its growth follows certain laws, and yet always produces individual forms. Formed almost like a sculpture by nature, the tree represents a great challenge to artists.

Certain works in «About Trees» were made specially for this exhibition, such as the upside-down hanging birch-tree by Shinji Turner-Yamamoto in Museumsstrasse just in front of the exhibition entrance or the big mural by Paul Morrison. Valérie Favre and Katie Holten also painted or drew works especially for the occasion. One integral part of the exhibition is the action of planting ten new trees, which ZPK carried out on the day after the opening along with the architect Renzo Piano, as well as the extensive accompanying programme with many guests, all of which bring a special interest in trees.