Making colourful abstract works, Assig combines the shapes of faces, bodies and patterns with words and sentences. Emmerik presents the drawings of her last graphic novel 'Maanmensen'. Are on view new works by Wiegman: a light sculpture, a series of photographs and two video pieces. 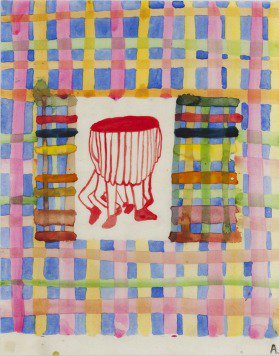 Martin Assig (Schwelm, 1959) makes colourful abstract works of art. He combines the shapes of faces, bodies and patterns with words and sentences. At times his subjects are light-hearted, at times heavily charged. This autumn around two hundred drawings, paintings and sculptures will be brought together in ‘Glückhaben’, an exhibition in two rooms in the museum’s collection wing. The exhibition is a joint venture with Haus am Waldsee in Berlin, where it was shown last spring.

Martin Assig draws his inspiration from many sources – religious traditions, folklore, rituals, the music of Bach, the art of Edvard Munch and Paul Klee, the literature of Marguerite Duras and the Russian authors. Drawing after drawing evolves out of a patient working process, like that of the monks who worked on medieval manuscripts or present-day comic strip artists. Part of the exhibition will showcase a large number of drawings from the St Paul series, which Martin Assig began in 2009 as a tribute to the artist Paul Klee. These works spring from observations in everyday life. Diverse materials – pigments, beeswax and charcoal – create intimate and personal worlds, where sensuality and spirituality come together.
Enriching the Collection

Four drawings and one painting by Martin Assig were recently added to Museum Boijmans Van Beuningen’s collection. The museum holds one of Europe’s finest collections of drawings and prints, with prominent collections of works by Italian, German, Dutch and French artists. The surreal quality of the drawings is key in selecting for the collection. The museum is thus continuing the tradition of collecting works by artists like Dalí, Magritte, Delvaux, Tanguy and Zürn. As well as Martin Assig’s works, drawings by artists who are solely draughtsman, such as Ewoud van Rijn and Paul Noble, have also been added recently.
CV & Catalogue

Martin Assig lives and works in Berlin, where he studied at the Hochschule der Künste. Martin Assig’s drawings, paintings and sculptures have featured in solo and group exhibitions all over the world. His works have also enriched collections of international museums and private collections from Oslo to New York.
A catalogue in German and English is being published by Walther König to coincide with the exhibition. It will include essays by Björn Vedder and Durs Grünbein and will be for sale in bookshops and during the exhibition in the museum shop.
Where
This exhibition will be on view in the galleries 39 and 39 on the second floor.

In July artist and writer Pam Emmerik (1964-2015) penned the last words of her graphic novel ‘Maanmensen’, which she was commissioned to write by Museum Boijmans Van Beuningen. This autumn the museum will pay tribute to Pam Emmerik with a presentation of these drawings in the print room.

‘Maanmensen’ is a personal document consisting of 120 pages in which Emmerik recounted her experiences and ideas and reflected on art, politics, religion, beauty and the museum. She did this in drawings with bright colours and imaginative figures. She combined these drawings, or built them up from often shocking, bold, controversial and poetic texts. This autumn a limited edition of the graphic novel ‘Maanmensen’ is on sale in the museum shop and online at webshop.boijmans.nl

Pam Emmerik was suddenly taken from us on 3 July. Museum Boijmans Van Beuningen was one of Pam Emmerik’s favourite places and she was very involved with the museum. She gave workshops for children, took part in debates and was an ambassador for the planned Collection Building. She gave inspiring lectures and guided tours in The Road to Van Eyck (2013) and during other exhibitions. Since 2013 the walls of the Espressobar have carried her colourful mural ‘Ook Duende’ on which her teacher René Daniëls (1950) also collaborated at her request. This temporary mural can be seen until 2017.

Nothing is what it seems in the work of Diet Wiegman (1944). Drawings become sculptures, sculptures become three-dimensional collages, and collages become light projections. He transforms an accumulation of scrap materials into Michelangelo’s David or Magritte’s La reproduction interdite. This autumn Museum Boijmans Van Beuningen presents a new work by Wiegman alongside a light sculpture, a series of photographs and two video pieces.

Diet Wiegman graduated from the Willem de Kooning Academie in Rotterdam in 1965. Throughout his fifty-year career he has never restricted himself to a single discipline or theme. He makes drawings, paintings, sculptures and public art works. Wiegman quickly achieved recognition for his light sculptures in which light is projected onto an assemblage to create the shadow silhouette of an iconic sculpture.
Artistic family

It was no surprise that Diet Wiegman would become an artist. His father Theo Wiegman was a painter who was taught by his father Gerard Wiegman. Diet Wiegman’s son Mike Redman has earned an international reputation as a musician, producer and filmmaker. In 2007 he made ‘Anagram’, an award-winning film portrait of his father in which no words are spoken. The film will be screened in the exhibition.