19 works, ranging from 1985 to 2000, a core selection of Arnulf Rainer's cross and angel paintings. "Intimacy in Discourse" explores how various painting sizes affect artists and viewers. Black-and-white prints by Benny Joseph trace the rise of rhythm and blues music in the 1950s and 1960s. A site-specific video installation from Mali De-Kalo, "Here's Looking Back at You" presents images of woman from the ESKFF Collection. 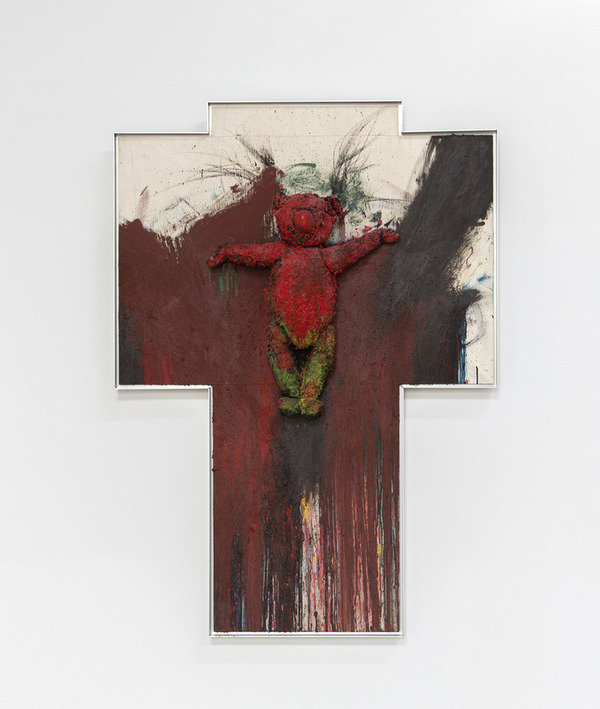 Born in 1929 in Baden, near Vienna, Austrian artist Arnulf Rainer was a nonconformist from the beginning: he dropped out of art school twice after only a few days, preferring instead to follow his intuition. Now internationally-acclaimed, with retrospectives at the Georges Pompidou (1984) and the Guggenheim New York (1989), his body of work is immense, his singular, provocative influence uncontested.

Using a variety of media and materials, and mostly recognized for his "overpaintings," in which he blocks out artworks, Rainer’s impulses have been fueled by obsession, the subconscious, dreams, Surrealism, primal forces, and mythology. Using unconventional methods such as painting in altered states, using passport photo booths for self-portraits, painting blindfolded, or with his feet–sometimes with his entire body–Rainer manipulates form, composition, and perception to capture extreme emotions. He searches for the limits of an image, in order to push past them and release hidden energies.

In this exhibition, Ayn Foundation presents 19 works, ranging from 1985 to 2000, a core selection of his cross and angel paintings. Beginning in the 1950s, Rainer was drawn to the feelings and states that accompanied religious devotion and practice. He approached the subject from theological art historical and personal viewpoints, desiring to re-contextualize the symbols. “None of these works claims to have been intended specifically for a sacred context,’ he said in 1980 (The Menil Collection catalogue, 1992, p.5). “They arose from very personal roots. They were inspired by a subjective emotion regarding both the person of Christ and the event but also the idea of the cross.” Concerning the angels, he wrote in a 1992 essay (The Menil Collection catalogue, 1992, p.113), “Angel’s robes, to my mind, are the transcendental fulcrum, the much-sought missing link on the formal chain between spiritual and temporal aesthetics… For my own part, I have always been inspired by William Blake’s idiosyncratic visions of angels but also by those of Giotto and Fra Angelico, which encouraged me to become involved with the visual splendor of these beings. But this has been limited to shy, covert glances at their attire. I do not dare look at them in the face.”

In 2000, to commemorate his 70th birthday, the Stedelijk Museum Amsterdam, the Kunstforum Bank Austria, Vienna and the Neue Galerie der Stadt Linz held exhibitions in his honor; in 2004, he was granted an honorary doctorate from the Faculty of Catholic Theology at the University of Münster; two years later he received an honorary doctorate in theology from the Katholisch-Theologische Privatuniversität Linz. The Arnulf Rainer Museum opened In September 2009, in his hometown of Baden.

This exhibition is curated by Dr. Corinna Thierolf from the Pinakothek der Moderne in Munich, Germany. It is the inaugural presentation by the Ayn Foundation at Mana, installed in a 5,000-square-foot gallery on the art center’s first floor. Ayn Foundation was founded in 1993 and is dedicated to presenting comprehensive, large-scale installations by major international artists to the public. Between 1993 and 1995, the foundation established the Arnulf Rainer Museum in Chelsea, New York.

Curated by Phong Bui, both shows are proposed experiments to explore the various conditions that lead to the production of small paintings: how paintings’ sizes are determined by artists’ conscious and unconscious intentions, and how those sizes, in turn, affect their relation to viewers in the various spaces the artworks quietly occupy in contemporary visual culture.

Bui commented that both curatorial ideas were inspired by Jackson Pollock’s admiration for Albert Pinkham Ryder, whose modest-sized paintings, such as “Moonlight Marine” (1870 - 90) which measured 11 ½ x 12 inches, evoke monumental scale and immensity of space, while Pollock’s large-sized canvases attain a sense of intimacy. The show also references Thomas Nozkowski’s term, “reasonable size paintings,” that describes his two standard sizes, 16 x 20 inches and 22 x 28 inches, within which he has consistently worked since the early 1970s.

In conjunction with the exhibition, poetry reading, dance performance, and panel discussions will be organized at both venues. Admission to all events is free to the public. A free color catalogue of the exhibition will also be available.

October 18, 2015 - January 10, 2016
The Early Years of Rhythm and Blues
Photographs by Benny Joseph from the Documentary Arts Collection

Black-and-white prints by Houston photographer Benny Joseph trace the rise of rhythm and blues music in the 1950s and 1960s.

The International Center of Photography at Mana presents photographs from an important recent donation of African American vernacular photography to the center by Documentary Arts. Organized by guest curator Alan Govenar, founder of the Documentary Arts, the exhibition consists of black-and-white prints by Houston photographer Benny Joseph (b. 1924) that trace the rise of rhythm and blues music in the 1950s and 1960s. Featuring portraits of such celebrated performers as B.B. King, Sam “Lightnin’” Hopkins, and Junior Parker, as well as non-R&B singers Mahalia Jackson and Della Reese, the exhibition also includes Joseph’s striking portraits of prominent African Americans of the same era, such as Martin Luther King, Jr., Thurgood Marshall, and Barbara Jordan.

Joseph’s prints are part of the 60,000-piece Texas African American Photography Archive (TAAP), Founded by Govenar and Kaleta Doolin, the centerpiece of more than 100,000 photographs, films, videos, audio recordings, and new media works donated to the ICP by Alan Govenar, founder of Documentary Arts. ICP’s acquisition of the Documentary Arts’ Collection is part of its substantial photography collection, which is located in a state-of-the-art 15,000-square foot facility at Mana Contemporary. The move to Mana earlier this year was undertaken to allow for the acquisition of additional large archives, such as TAAP, and their use in inventive digital projects in ICP's media lab.

Mali De-Kalo
Relaying #2: Testimonies on Motherhood Lost
A site-specific video installation from Israeli artist Mali De-Kalo, focusing on the stories of women who have been rejected from their children's lives

In 2011, Mali De-Kalo, a multidisciplinary artist based in Tel Aviv, began collecting interviews with Middle Eastern women whose children have rejected them following the dismantling of the family unit: a divorce, a fall-out, or separation. Without sufficient agency, and under the negative influence of the other parent, these children have estranged themselves from their mothers.

De-Kalo spent three years speaking with the women who have suffered this trauma. With the help of two writers, she condensed her findings into vivid first-person monologues, four- to five-minute testimonies that reveal intense pain and sorrow. These are being read by performers and filmed in their own homes, to fully protect the identities of the mothers. This anonymity reflects the larger societal issues of the official and unofficial laws of motherhood and femininity.

The narrators, several of whom are gender activists who espouse collaborative acts through solidarity with women, volunteered their services in support of the mothers. As friends and colleagues of the artist, they participated in the Relaying series at her invitation out of a profound sense of empathy.

Relaying #2: Testimonies on Motherhood Lost is the second iteration of a previous work, Relaying #1: Testimonies on Motherhood Lost which first appeared at the Meadows Museum of Art in Shreveport, Louisiana, in 2014. Both works are site-specific and part of a larger continuum. For this installation at Mana, De-Kalo expanded even further on her footage and stories, developing and modifying the narratives and spatial elements.

An enormous projection of the eight women leads to the inner room, like a Greek chorus in contemporary clothing, each appearing briefly before vanishing, to be replaced by another. They stand in silence, mutely beckoning the viewer inside. At the inner gallery, their silence evolves into a story being told. The performances are timed not to overlap but to move from one video to the next. The stories sequence each other, drawing in the visitors who are now witnesses. Everything connects and loops into one, constantly evolving relay.

De-Kalo calls these disquieting stories “readymades” that she retrieves and reconstructs. Her narratives are real and scripted, factual and fabricated, and are meant to be regarded as such. The documentary, once categorized as reportage, now more often than not slips back and forth between the objective and subjective, the journalistic and the aesthetic. For De-Kalo, the act of telling the stories in Relaying is of critical importance, an “act between art and activism,” she says, offering solace, healing and perhaps, eventually, even justice.

The languages spoken in Relaying #2 are English, Hebrew, and Arabic. De-Kalo continues to collect testimonies, and as this project grows and finds new locations, the artist plans to introduce more languages and countries, expanding the relay as much as possible.

The ESKFF Collection began in 1990, when Eileen S. Kaminsky bought her first lithograph. Driven by instinct, her collection has grown expansively over the years. Going through it, Ostrow observed an emphasis on Woman, and most particularly, the various parameters and subjectivities that influence how both artist and viewer confront female representation.

As a starting point for this exhibition, Ostrow referenced Jacques Lacan, the early 20th century French philosopher and psychoanalyst who controversially declared “La femme n’existe pas” (Woman does not exist) as a strong statement against the idea of the female as the “other” to the male. Instead, the female is a being and force of her own within the human race.

To this effect, Ostrow created four Sessions, or narratives, to view traditional stories of the feminine in a more psychoanalytical light. In “Ancien Régime,” time is of the essence: as history evolves, so do the values through which we see images. In “On The Face of It,” we are asked to consider how much can be deduced about Woman through portraiture. In “Here’s Looking at Her,” the images objectify Woman, yet paradoxically, exalt many of her wide-ranging emotions. “A Day in the Life of…” examines un-named, solitary subjects, asking viewers to consider how much of a person can we truly understand from one image, even if the chosen moment is unguarded.

In his accompanying essay to the exhibition, Ostrow pushes back against the idea of “essential qualities” to characterize any person. He writes: “Definition is a device; a construct based on a generalization, which is nothing more than an abstract schema of the thing in question.” Simplicity undermines complexity.

The exhibition is presented in the ESKFF Gallery on Mana’s fifth floor.