Going beyond the bounds of the documentary photograph, LaToya produces complex compositions with multiple centrings and mises en abyme and calling on the performative gesture. Barrada explores the Moroccan identity and also arrangements for collecting and displaying at natural history, ethnography and archaeology museums. 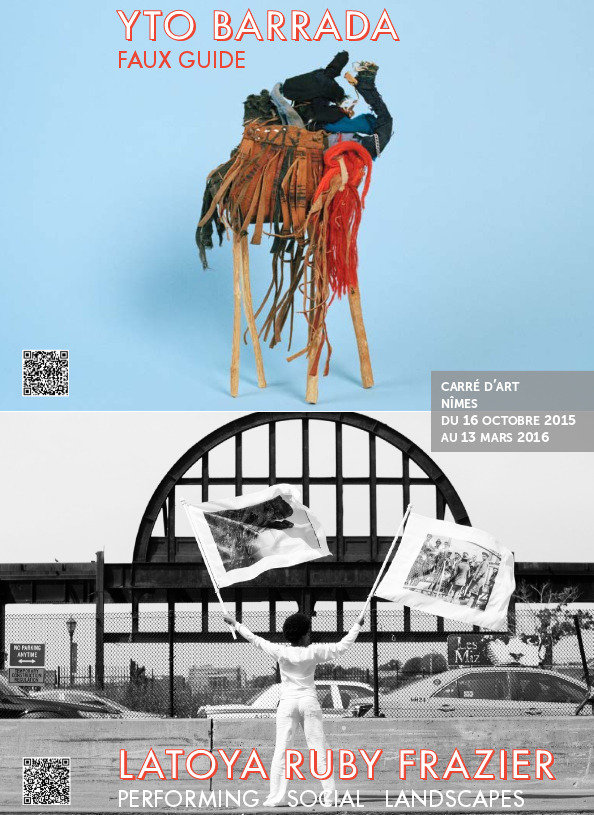 This is her debut solo exhibition at an art institution in France.

LaToya Ruby Frazier (born 1982) takes as the subject of the photographs her home town of Braddock, Pennsylvania, or rather the people who live there. This is the working-class suburb of Pittsburgh, where there used to be a large steelworks. For a number of years she has been working on those close to her and taking them as witnesses to the economic slump. Her work belongs to a long tradition of committed photographers including Dorothea Lange, Walker Evans and Gordon Parks. She is interested in three generations of women. Her photos keep coming back to her grandmother, her mother and self-portraits. Going beyond the bounds of the documentary photograph, LaToya Ruby Frazier produces complex compositions with multiple centrings and mises en abyme and calling on the performative gesture. Her contribution to the Pier 54 project on the New York City Highline was a performance in which she brandishes flags on which are printed historic photographs linked to the pier. She will be replaying that series on denim flags (denim being originally “de Nîmes”, from Nîmes), with reference to her 2011 series Campaign for Braddock Hospital in which she responded to a campaign for Levis jeans at Braddock.

She has exhibited mostly in the United States (MOMA, New Museum New York, the Whitney Biennale Museum or the Chicago Museum of Contemporary Art).

Yto Barrada was born in Paris in 1971 and is currently living in New York and Tangiers. Her early projects in the late nineties were in connection with the city of Tangiers, in Morocco. In them she revealed the processes of globalization and individuals’ hopes in possible emigration to Europe. The project on show at Nîmes carries on her exploration of the Moroccan identity and the question of origins and also arrangements for collecting and displaying at natural history, ethnography and archaeology museums. In it she thinks through the status of the archives and industry developed around archaeological digs. One series of photographs presents a set of children’s toys from North Africa kept at the Musée du Quai Branly in Paris. Another set of works make direct reference to archaeological excavations going on across the Sahara, the discovery of fossils, as well as the booming market for fakes. The film Faux Départ is a journey through the landscapes of the Atlas mountains and a description of the work of the counterfeiters. It is at once a reflection on geological eras, the history of our planet and also the history of France. This whole set of items and pictures tells us individual stories but also the way in which we can recount history through the collecting of objects, the making of artefacts and their display in museum facilities that evolve over time.
Yto Barrada has exhibited at Witte de With (Rotterdam), Haus der Kunst (Munich), SFMOMA (San Francisco), Tate Modern (London), MoMA (New York), and the Venice Biennales of 2007 and 2011. In 2011, she was named Deutsche Bank Artist of the Year and was awarded the Abraaj Prize in 2015. She is the founder of the Cinémathèque in Tangiers.