Nuages et dechets. His latest works, comprising paintings of clouds, a series he initiated in 2011, new sculptures and a series of "wastes". His works often refers to history, philosophy, psychoanalysis or even mathematics and mythology. 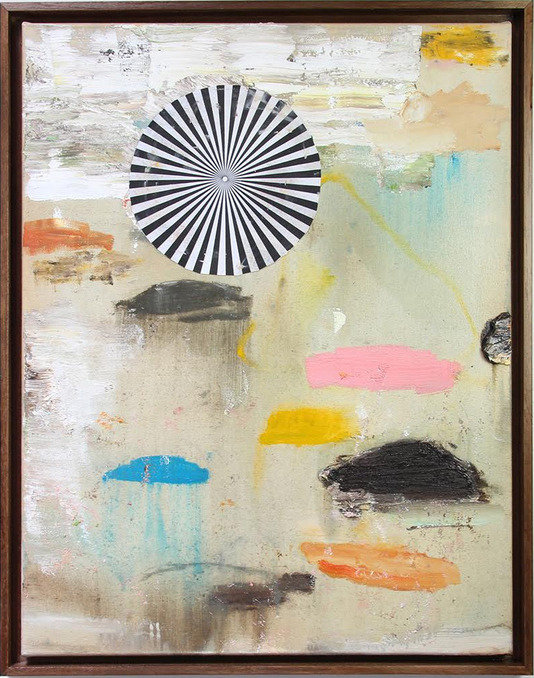 The gallery Thomas Bernard - COrtex Atheltico is delighted to present Benoît Maire's latest works for his solo exhibition Nuages et déchets comprising paintings of clouds, a series he initiated in 2011, new sculptures and a series of "wastes".

Benoît Maire, born in 1978 at Pessac, lives and works in Paris. Former resident of the Palais de Tokyo and student at Villa Arson, Benoît Maire studied art and philosophy, making them encounter in his practice by giving shape to theorical concepts. His works often refers to history, art history, philosophy, psychoanalysis or even mathematics and mythology.
He won with Isabelle Cornaro the Fondation d’entreprise Ricard prize in 2010. Among his last soloshows to be noticed : David Roberts Foundation (London, 2013), Fondazione Giuliani (Rome, 2013), la Verrière – Fondation Hermes (Brussels, 2014). His films has been shown at Centre Pompidou (Paris, 2014), Cinémathèque de Vancouver (2013) and Tate Modern (London, 2010).

Mathieu Copeland: I would like to talk to you about “waste” and “indexed objects”, two terms which shape your work. This idea of “waste” has deeply influenced my thinking about your recent work and is probably central to conceptualising any work of art. The idea that a work is simply the waste product of a thought puts the focus on the fact that the thought is the work. And this naturally leads us on the act of indexing, because by calling it waste, we are already indexing it.

Benoît Maire: Decisions to produce objects mean that other objects are produced as a by-product. So why not keep these by- products, which are lost and to be discarded – these waste products of decided objects that know no name. As they have never enjoyed the status of existence, they escape the ontological classification of objects. They are merely potential objects which are then withdrawn. I have decided to keep them and, by indexing them, give them a status. There are several ways they can be indexed. You can index them by an article, a prefix or a suffix. You can also index them by a word or concept. That is what I do. The first indexing could simply be by pointing at it with a finger. The first time I indexed my objects I simply put a sticker of hand on top of them. And not just any hand! The hand of John the Baptist pointing at sky. This is the idea of transcendental indexation as developed by Alain Badiou, which allows us to measure the power of the appearance of an event. It is a measurement tool. I saw the perfect illustration of this kind of transcentental indexation in the gesture made by Leonardo da Vinci’s John the Baptist. So naturally I started indexing my objects using this sticker. I then indexed them with a sticker representing a wing, the wing of the annunciating angel, also by Leonardo. Leonardo is pretty gifted when it comes to stickers… After that, I indexed them by using self-adhesive plastic letters which combined to make words such as “the”, “those”, “forgotten”…

MC: Indexed objects are not named but characterised by their length, width, by everything that makes them what they are.

BM: Exactly, their material characteristics. The backup plan is linked to the materialistic belief that retains the material properties of objects. Indexing addresses the fact that these waste items lack a nomenclature and it helps to store them. Given that they escape classical ontology, we need indices if we want to reference, classify or store them. Indices are used to save them, to include them in a backup plan which, in my most recent exhibitions, I have called “letre”.

MC: Ultimately, all works are waste. They are a waste product of thought, of desire.

BM: It’s interesting to differentiate between decided objects and waste. In an exhibition, waste objects are abandoned in space. All that they express is this abandonment, their detachment from the decided object. In this case, is a work a waste object? I do not think so, because a work is definitely a form of expression, but it is inseparable from a particular direction, and this makes it a guided expression. It is this process of guiding expression in practice (in this instance, artistic practice) which both differentiates it and gives rise to different waste objects depending on choices that are made. I like to think of raw expression as being like chucking garbage out in front of you. But a work cannot be reduced to this type of expression, because it arises from choices which allow it to become more clearly delineated and separate it from its potential being. To all intents and purposes, the boundary between the waste object and the decided object is a fairly fuzzy one. You can still take a waste object for a decided object, and vice versa. However, what I am intersted in is questioning, from a philosophical point of view, the boundary between the two and seeing the decided object as an object shaped by guided expression. This decided object, this work of art, has become cut off from whatever else it could have been, and during this process has generated waste products.

MC: Nevertheless, indexing annuls the object while giving it a reality.

BM: It saves it, but the aim of humanity is to create a world where there are no longer any decisions to take, and where too there is no more waste. A world before man, where the droppings of a bird benefit a palm tree; or a world where man has determined that it should no longer be possible to produce waste. That is our ecological challenge.

MC: Why did you use this term “waste” when it has such a negative value?

BM: Until recently, I believed that the act of speaking was that of chucking garbage in front of you. By talking of garbage I was able to place myself on the accursed, dark side of philosophical genealogy. This garbage which is extracted from the bottomless pit of our consciousness and which we throw out in front of ourselves, is what allows us to move forward. A negative value has been ascribed to something which effectively drives expression. What is interesting about expression is its bottomless or groundless part. The groundlessness of expression in expression is what matters to me. My idea was that all that we write and speak involves chucking garbage in front of us. We are purveyors of garbage. My next thought was that the artist was a garbage collector. Then I talked about this with a friend, and it was his turn to be the garbage collector... An illustration of how we throw things in front of us when we speak. An illustration of the garbage collector who picks things up from the ground and gives them meanings. So, when I make sculptures, I am forced to make a decision and this guides my objects and gives them qualities. And I subtract the parts of these objects that I am going to throw away. Ultimately, it is the waste that attracts me, and perhaps it is this particular waste that is linked to the strongest ontology, as it is the reverse of the teleological ontology which guides my objects through decisions. The non-decided part of the object remains in the waste. And the waste, as it is non-decided, is what contains the greatest power. A power that we cannot delineate, nor can we name it because it is unrelated to any decisions arising from the naming process. All that we can do then is to index it, to point it out with a finger.