Entitled Mainland, the exhibition of Beveridge is illustrated by an image that presents the opposite: a desert island. The central series of Artex Paintings by Rees, revive a decorative ceiling pattern, popular in British working class homes during the 1970s. 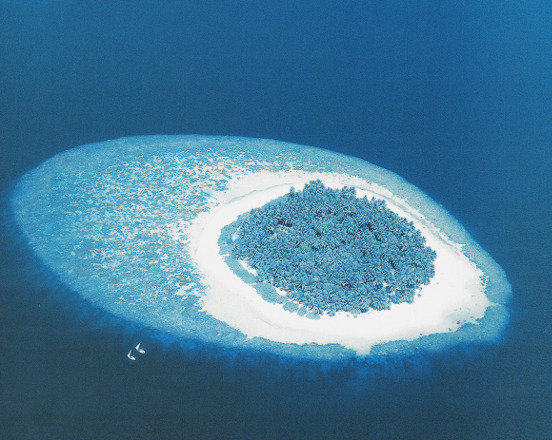 MOT International is pleased to present a new body of work by Gabriele Beveridge. Entitled Mainland, the exhibition is illustrated by an image that presents the opposite: a desert island. The sun bleached advertisement stages a destination on the fringe of the world; once a place of luxury, it is now forgotten, abstracted and submerged in shades of blue.

Representations of the island have shifted over the centuries. If for the ancient Greeks, the insular world was a mystical land inhabited by the gods, it became with Thomas More the ideal marginal space for the development of utopian societies. Depicted as a floating piece of earth, suspended in the middle of the sea, the island is promoted today through advertising as a place of leisure and relaxation, detached from the mainland and society.

The artworks in the exhibition echo this duality, conflict and mysticism of Island and Mainland in form and feeling. Here we witness found and made objects: a structure made of chrome, usually used as storage units for shop displays, is pushed until it becomes uncannily wrong, while off kilter glass bubbles clutch to the edges of obsolete advertisements portraying young and distant women whose image is aged and discoloured.

Relentlessly pursuing the edges of a paradise and beauty ready to burst, Beveridge creates an installation that plays with the stereotypes of the island and in which advertised fantasies are merged and conflated. The insular world is presented through an almost clinical aesthetic, as the place for infinite introspection, both enclosed and open to the world.

You bring everything you know that’s real. From the unending isles of Dreamland to your compact home. Billionaire baby. When it bursts you are born…

Gabriele Beveridge (born 1985, Hong Kong) lives and works in London. Recent solo exhibitions include: Health and Strength at La Salle de Bains, Lyon (2014); Gold Diamond Park at Elizabeth Dee, New York (2014); By Mistake or Design at the Zabludowicz Collection, London (2014); Incidental Healer at Van Horbourg, Zurich (2013); In A Normal World I’d Be There at OUTPOST, Norwich (2012) and The Conspiracy at Supplement, London (2010).

Dan Rees engages with a tradition of conceptual art making, in which familiar tropes and genres – monochromes, abstracts, ready-mades – are quietly unhinged and recuperated as strategies for production. The exhibition’s central series of Artex Paintings revive a decorative ceiling pattern, popular in British working class homes during the 1970s. Creating this type of plasterwork, once a skilled manual job, has now been rendered all but redundant as the material fell out of fashion during the late 1980s. Rees’ methodology is driven through both a recognition of the steady disappearance of the working class over recent decades and the overwriting of much of its history, as much of the disappearance of artex as a decorative mean itself. Within Rees’ paintings, distinctive shell-like patterns are combed through energetically coloured fields. Incidental manifestations within the fluid oil register against the formal exercise of combing, which both obliterates and transforms the painted surface beneath.

Devoid of saturated images or commercial slogans, the impersonal forms of Rees’ Trivision Billboards punctuate the exhibition. With their industrial and austere presence, they simulate or disguise themselves as minimalist sculptures. Placed variously on the walls and floors of the gallery spaces, their repetition suggests how they might be ordered in manifold sizes and formations.

However, while minimalist objects traditionally asked to be considered as materials without reference to an outside reality, Rees undermines this logic by presenting a mechanism intended to broadcast information.

Similarly, the Artex Paintings could be understood as a deliberate subversion of abstract expressionism’s themes, in which gestural spontaneity has been rendered via the methodical repetitions of a builder’s tool. In Rees’ continued examination of reproduction and repetition, the work enters the format of a series, removing it from wry conceptual exercise.

While the abstract works of the Artex Paintings and the minimalism of the billboards do not project the artist’s ideology directly, this is more clearly revealed in Rees’ video work Road Back To Relevance. Produced in collaboration with an advertising strategist and designer, the slide-show questions of how various modes of social engagement can remain relevant today by charting the course of a specific solidarity campaign, started in the 1980s between Wales and Nicaragua. While the visual tone of this work might suggest a need for such solidarity campaigns to modernise in order to reach a wider audience, the conclusion appears to be the opposite.

Rather, the work points to the relevance of maintaining an inclusive and personal approach towards creating new connections between people, one that goes beyond issues of technology and dispersion.

Dan Rees (born 1982, UK) lives and works in Berlin. Solo exhibitions include Stimulate Surprise at Tanya Leighton Gallery, Berlin (2015); Kelp at MOSTYN, Wales and at The National Museum of Wales, Cardiff (2013); Gravel Master at The Goss-Michael Foundation, Dallas (2013); Philanthropy at Jonathan Viner, London (2011); French Cricket at Tanya Leighton, Berlin (2010); They Don’t Make Them Like This Anymore at T293, Naples (2009) and Alan Brooks and Dan Rees at MOT International, London (2008).