The terrifying world of visionary, 'gothic-fantasy' prints. More than 170 works from Goya to Redon, including prints by Delacroix and Gustave Dore' introduces the visitor to 19th century engravings and lithographs. On display 250 works of Kuniyoshi to explain the function of the imagery and its importance in Japanese culture. 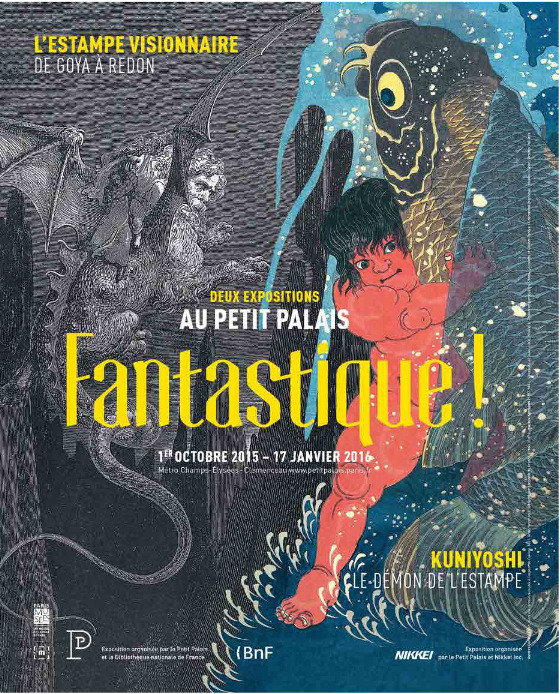 curators: Valérie Sueur-Hermel, Chief Curator of the Department of prints and photography at the French National Library (Bibliothèque nationale de France), academic curator of the exhibition; Gaëlle Rio, Curator at the Petit Palais.

The Petit Palais is host to the French National library (Bibliothèque nationale de France) to celebrate, for the first time and on a grand scale, the terrifying world of visionary, ‘gothic-fantasy’ prints. More than 170 works from Goya to Redon, including prints by Delacroix and Gustave Doré will introduce the visitor to this important aspect of 19th century engravings and lithographs. It is the world of the macabre, of gothic bestiaries, haunted landscapes, images from dreams and nightmares – the triumph of darkness!

This immersion in fantasy art is organised in chronological order.

The exhibition is introduced by a contemporary video by Agnès Guillaume – a ballet that conjures up the black birds of sleepless nights – and it begins by focusing on key figures who influenced the history of engraving and who were studied and reinterpreted by 19th century engravers. The visitor will be greeted by Albrecht Dürer’s Melancholia, Jacques Callot’s Temptation of Saint Anthony, Rembrandt’s Dr Faustus, a plate of Piranesi’s Prisons, and an engraving after Füssli’s Nightmare.

The exhibition will then seek to demonstrate how this ‘gothic’ inspiration evolved at the hands of three successive generations of artists. In the first period, Eugène Delacroix is placed at the centre of the Romantic generation of 1830. Their engravings were veritable black and white manifestoes of Romanticism and much influenced by Goya. Goya’s motifs spread through the artists’ studios and were a spur to their imagination. The figure of the devil was everywhere in popular prints.

The second section examines the neo-Romantics around Gustave Doré; he was the most emblematic artist of that movement, as is evidenced by his illustrations for Dante’s Inferno in 1861. At the end of the trail, there are plates by Odilon Redon – notably his Dans le rêve, which laid the path to Symbolism.

In this exhibition, visitors will discover works by the great masters of engraving – Delacroix, Grandville, Gustave Doré, Rodolphe Bresdin, Charles Meryon, Odilon Redon and Félicien Rops – but also less well-known artists like Alphonse Legros, François Chifflart, Félix Buhot, Eugène Viala or Marcel Roux. What their artistic production at the time had in common was the way they all focused on a kind of ‘black Romanticism’ that fed on the very matter of the engravers ink.

Visitors to the Petit Palais are invited to discover, for the first time in France, the work of the extraordinary artist, Kuniyoshi (1797-1861). Thanks to generous loans from Japan, supplemented by loans from French institutions, the 250 works on display will give a full picture of Kuniyoshi’s dramatic genius and the expressive beauty of his work. The exhibition will explain the function of the imagery and its importance in Japanese culture. Kuniyoshi’s work has had an enormous influence on manga art and tattooing.

Kuniyoshi was an almost exact contemporary of Eugène Delacroix but, in the West, he never achieved the fame of Hokusai or Utamaro. Perhaps because of its nonconformist quality, his work was not taken up in Europe during the late 19th-century vogue for decorative Japanese art, although it was much admired by Monet and Rodin. His prints are characterised by originality in their inspiration and composition, violence in the monster and warrior prints, and humour in the Chinese shadows series, the caricatures and his representations of the life of cats.

An introductory space will be devoted to a presentation of the artist and his reception in France in the 19th century. The next five sections are designed as variations on his engraved work and will show the teeming exuberance of his inspiration. Visitors will first discover a section devoted to warriors and dragons, a stylistic genre in which Kuniyoshi excelled. In the next room: famous Kabuki actors whose highly expressive portraits tend towards caricature. After that, we linger over pleasures and distractions in Edo, in the guise of a large variety of surprising prints, the ‘bijin-ga’, for example, traditional female beauties, and some even stranger engravings, the ‘kodomo-e’ – these are pictures of children and they reveal the artist’s very personal take on scenes of daily life. The next room contains a selection of landscape prints in which the slightly photographic point of view gives them a great sense of modernity. The exhibition ends with an important body of satirical and humorous work that attests to the artist’s incomparable talent for caricature. These images of day-to-day life, populated by anthropomorphic cats, birds and toads, have influenced a whole generation of manga artists.

Didier Blin’s bold, contemporary scenography will set up a dialogue with the very personal and original world of Kuniyoshi and will give pride of place to his formal invention, which is characterised as much by an exploration of the limits of different formats as by his compositional effects. The catalogue accompanying the exhibition will be the first publication in French devoted to Kuniyoshi.

The exhibition is organised by the Petit Palais and Nikkei