The Beast is the Sovereign

The focus is placed on artistic practices that challenge, reverse, or dissolve sovereignty -as brought to bear in concepts of the sacred, the nation- state, modern institutions, humanism, virility, or the unscathed, (hetero)normative body. 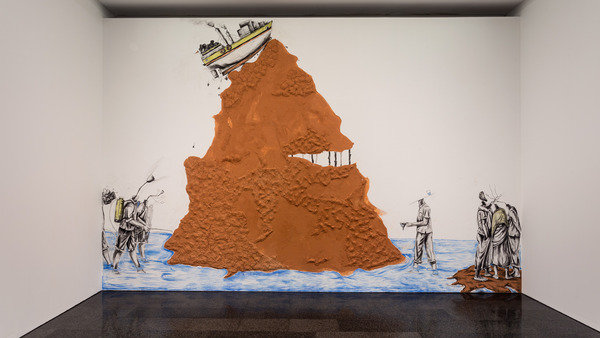 The project
The exhibition The Beast is the Sovereign explores constructions of the political sovereign in Western traditions of thought. The focus is placed on artistic practices that challenge, reverse, or dissolve sovereignty—as brought to bear in concepts of the sacred, the nation-state, modern institutions, humanism, virility, or the unscathed, (hetero)normative body.

The exhibition takes its name from the last seminar of Jacques Derrida (2002–03). For Derrida, the beast and the sovereign embody the two allegorical figures in politics that have historically existed outside of the law: the beast that is supposedly ignorant of the law and the sovereign who is enabled to suspend the law.

This division gives rise to a series of binary oppositions. On the one hand, the beast is regarded as animality, nature, femininity, the South, the slave, the non-white subject, the abnormal. On the other, the sovereign represents the human or even the superhuman, God, the State, masculinity, the North, health, the white and heterosexual subject. However, the beast is not only the counterpart of the sovereign: The beast is also the sovereign, as Derrida emphasizes—a couple showing up as "a duo or even a duel..."

The exhibition is structured around four core concepts:

It has been organized and co-produced by the WKV Stuttgart and MACBA, and is curated by Hans D. Christ, Iris Dressler, Paul B. Preciado, and Valentín Roma.

The Conflict
At the premiere of the exhibition this March in Barcelona it came to an éclat. Just before the opening, the then director, Bartomeu Marí, stated that one of the artworks was not suitable for presentation at MACBA and demanded its removal: a sculpture by the Austrian artist Ines Doujak that is part of a longstanding project reflecting the (neo)colonial contexts of textile production. In addition to countless other references, the sculpture may allude to the former Spanish King. Neither the curators, nor the artists participating in the exhibition were willing to tacitly accept this act of censorship. As a result, Marí cancelled the entire exhibition. After a wave of protest it was finally opened to the public. Marí announced his resignation. The two MACBA curators involved, Roma and Preciado, were dismissed without notice.

The experiences at MACBA sparked many questions generating the need to discuss them in the format of a conference that took place on October 17 and 18 at WKV. On the one hand it was important to us to discuss the case—after the silence, which followed the "big bang" in Barcelona—for the first time publicly. On the other hand the aim was to start a general debate about the open and hidden hierarchies, forms of intimidation, and authoritarian power plays and players, which—in the name of "professionalism"—are at work in the art world. And not least, we also wanted to talk about solidarity and other ways to resist intimidation.

After an intense weekend conference with artists, activists and curators we decided to constitute a platform for thinking collectively about the transformation of contemporary art institutions and critical ways of working within the art world.