More than 70 works, including paintings, sculptures, drawings, and prints. The exhib will introduce a selection of classic drip paintings made in 1947-1950, to contextualize the radical departure represented by black paintings, a series of black enamel paintings. 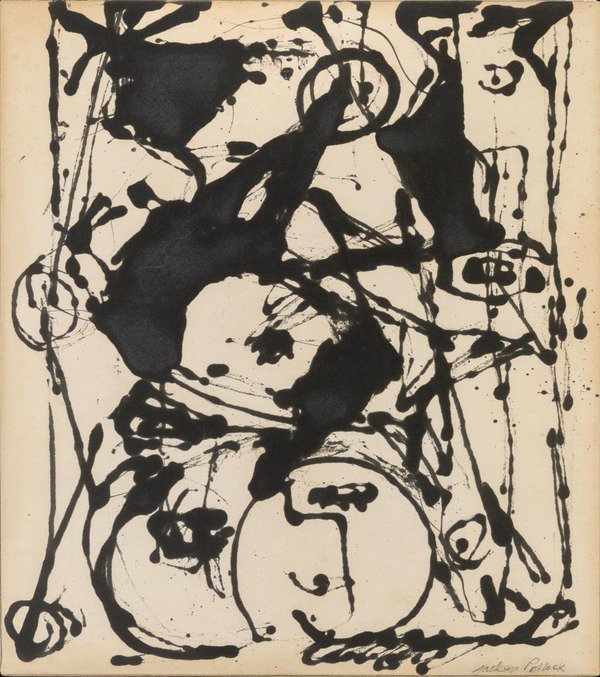 On November 20, the Dallas Museum of Art will present what experts have deemed a "once in a lifetime" exhibition, the largest survey of Jackson Pollock's black paintings ever assembled, and only the third major US museum exhibition to focus solely on the artist. This exceptional presentation will include many works that have not been exhibited for more than 50 years. Jackson Pollock: Blind Spots offers critical new scholarship on this understudied yet pivotal period in the artist's career and provides radical new insights into Pollock's practice. On view at the DMA through March 20, 2016, the exhibition will receive its sole US presentation in Dallas, with more than 70 works, including paintings, sculptures, drawings, and prints.

The exhibition will first introduce audiences to Pollock's work via a selection of his classic drip paintings made between 1947 and 1950. These works will serve to contextualize the radical departure represented by the black paintings, a series of black enamel paintings that Pollock created between 1951 and 1953. An unprecedented 31 black paintings will be included in the DMA presentation, nearly double the next largest survey of these works (which was presented at the Museum of Modern Art in 1967).

The Dallas Museum of Art is proud to have an important history with Jackson Pollock. Cathedral (1947) was acquired by the DMA in 1950 and was one of the first of Pollock's "classic period" paintings to enter any museum collection in the world. In 1967 Cathedral was complemented by Portrait and a Dream (1953), a painting that is considered to be one of Pollock's last major artistic statements. It is fitting then, that 65 years after the acquisition of Cathedral the DMA presents a definitive exhibition of Pollock's work.

Also featured in the exhibition are 30 works on paper made by Pollock during the same period as the black paintings. Made with enamel and ink and watercolor, the works on paper are considered by scholars to be the artist's most important as a draftsman. The exhibition will also feature five of Pollock's extant six sculptures, which provide a true three-dimensional experience of his well-known painting approach. Together with the 37 paintings on view, these works immerse audiences in Pollock's complete oeuvre and shed new light on the experimentation and ingenuity that has become synonymous with his practice.

While Jackson Pollock's leading role in the Abstract Expressionist movement has been widely discussed, less attention has been devoted to his black paintings period. In describing this pivotal phase in Pollock's artistic trajectory, the critic and historian Michael Fried remarked that "[Pollock is] on the verge of an entirely new and different kind of painting...of virtually limitless potential." The black paintings assembled for the exhibition will include significant loans from US, Asian, and European collections, as well as important works drawn from the collections of the DMA and Tate.

The catalogue
A scholarly and wide-ranging publication will accompany the exhibition with contributions by Gavin Delahunty, Dallas Museum of Art; Michael Fried, J. R. Herbert Boone Professor of Humanities and the History of Art, Johns Hopkins University; Stephanie Straine, Tate Liverpool; and Jo Applin, Senior Lecturer in Modern and Contemporary Art, University of York. In addition the publication will include over 60 full-color plates, an artist chronology, a black painting chronology, an exhibition checklist, and a number of, as yet, unpublished photographs by Hans Namuth of the black paintings.

This exhibition is supported by an indemnity from the Federal Council on the Arts and the Humanities. The exhibition is co-presented by Bank of America and Texas Instruments. Additional support is provided by The Pollock-Krasner Foundation, Inc.

The presentation in Dallas is made possible by TWO X TWO for AIDS and Art, an annual fundraising event that jointly benefits amfAR, The Foundation for AIDS Research and the Dallas Museum of Art, and the Contemporary Art Initiative. Marketing support is provided by the Dallas Tourism Public Improvement District, the Dallas Convention & Visitors Bureau, and Texas Monthly.

The Dallas Museum of Art is supported, in part, by the generosity of DMA Members and donors, the citizens of Dallas through the City of Dallas Office of Cultural Affairs, and the Texas Commission on the Arts.