For Zobernig the human form represents a new step away from the reductive and a return to complexity - the complexity of human perception, the human figure, and historical remembrance. In Sillman's works, gesture, color, and drawing-based procedures are imbued with questions of feminism, interiority, and humor. 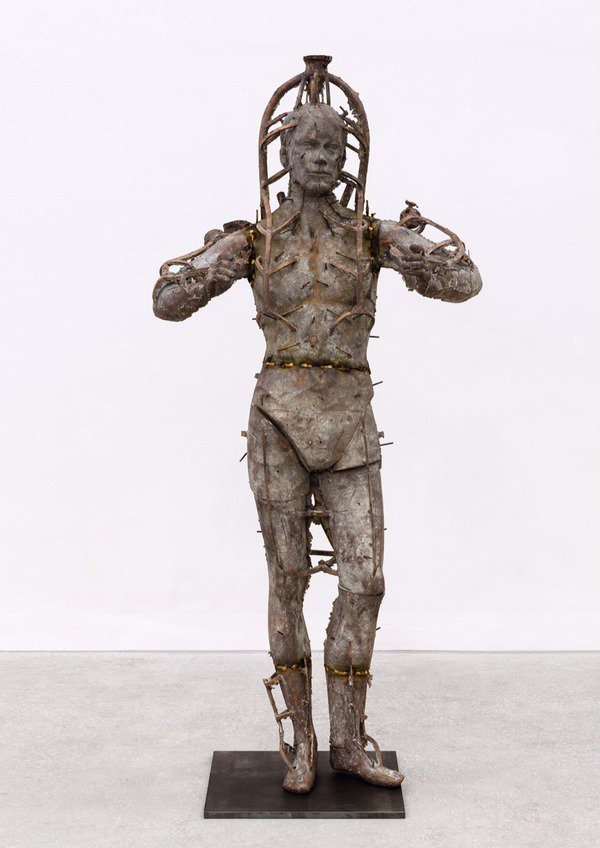 Heimo Zobernig constructs platforms, fabricates sculptures, whitewashes temporary exhibition walls, paints canvases, shoots videos, and appears in performances. He is continually involved in questions of how simplicity can be extracted from complexity. He has been highly influential not only within his native art scene but also in international discourses on art and the wider world of exhibitions. Zobernig began his career with small-scale paintings and black lacquered cardboard objects. His paintings were reactions to neoexpressionism and responses to the utopian, which since modernism has been associated with the austerely formal. Likewise in his sculptures, he utilizes simple methods of disclosure to make visible the historical charge within objects, which often adopt the appearance of initial models, simple prototypes, or cheap placeholders. He also modifies the rarely visible apparatus of exhibitions such as plinths, walling, platforms, and podiums.

In his exhibition at Kunsthaus Bregenz Heimo Zobernig is showing a variety of empty shelving on the first floor. For Zobernig shelves exhibit a relationship to human scale, never merely functional but always also becoming, as he expresses it, a »counterpart.« The second floor is divided by a black curtain that enters into a symbiosis with KUB’s architecture. Visitors entering are faced with the decision of whether to experience the newly created space surrounded by fabric, or peer behind the curtain.

For the Bregenz exhibition Zobernig is continuing considerations begun at the Biennale, adapting them to Peter Zumthor’s architecture. On the third floor a portion of the KUB ceiling’s glass panels is to be removed and a black ceiling, as already seen in the Hoffmann Pavilion at the Biennale, integrated instead, adopting one to one the measurements used in Venice. The sculpture originally envisaged for Venice but not actually exhibited there, is being exhibited in Bregenz for the first time. It is the cast of a human figure assembled from various modified mannequins. The human form represents a new step away from the reductive and a return to complexity — the complexity of human perception, the human figure, and historical remembrance.

New York-based artist Amy Sillman is an internationally reknowned painter. In her works, gesture, color, and drawing-based procedures are imbued with questions of feminism, performativity, interiority, and humor. Since the early 1990s, she has sought to corrupt and complicate the relations between figuration and abstraction. She speaks of them as “two things that are friends and antagonists”; thus her intensely layered canvases never resolve in either/or. Shapes of color may be interrupted by forms – a hand, a foot, or a figure – which in the next moment fall back into abstraction. Her paintings are determined by an ambiguous state of productive and humorous struggle. Painting is shown as an act of constructing, deconstructing, and reconstructing meanings or forms, as an arena of tensions wherein different pictorial models and figures interact.
Within the last few years, Sillman has expanded her investigations from the canvas to the screens of smartphones and tablets, to the inclusion of drawings and the production of zines, while continuously delving into the current situation of abstraction, color, and the diagram. With Yes & No, a special installation conceived for the particular space of the KUB Arena, Sillman proceeds to explore these paths. By proposing to show everything except paintings on canvas, Sillman is challenging the expectations of a painting show. Yes & No, her first institutional solo show in the German speaking context, reveals the underpinnings of her modes of working, and openly deals with everything which usually is not at the foreground: the thoughts behind the process of making a painting, on letting an image appear, the relation of fiction and the real, abstraction and figuration. It is a show about beginning and ending, painting and drawing, and the interplay of seeing, saying, and marking.

Amy Sillman
Sillman earned her BFA from the School of Visual Arts in New York and her MFA from Bard College in 1995. She has received numerous awards and grants, her work has been widely exhibited and is included in numerous public collections, including The Museum of Modern Art in New York, The Art Institute of Chicago, the Metropolitan Museum of Art, the San Francisco Museum of Modern Art, and the Whitney Museum of American Art. The first large-scale survey of her work, entitled one lump or two, was curated by Helen Molesworth. Starting at the ICA Boston in 2013, the exhibit traveled to the Aspen Art Museum, and then to the Hessel Museum of Art at Bard College. In December 2014 Amy Sillman participated in the group show The Forever Now at MoMA, New York, organized by Laura Hoptman.