Making meaning of a legacy' & 'Bozar Nikon. Monography series awards 2015'. A closer look at his oeuvre and gives the exhibition a contemporary perspective with works by 4 laureates of the Edward Steichen Award. 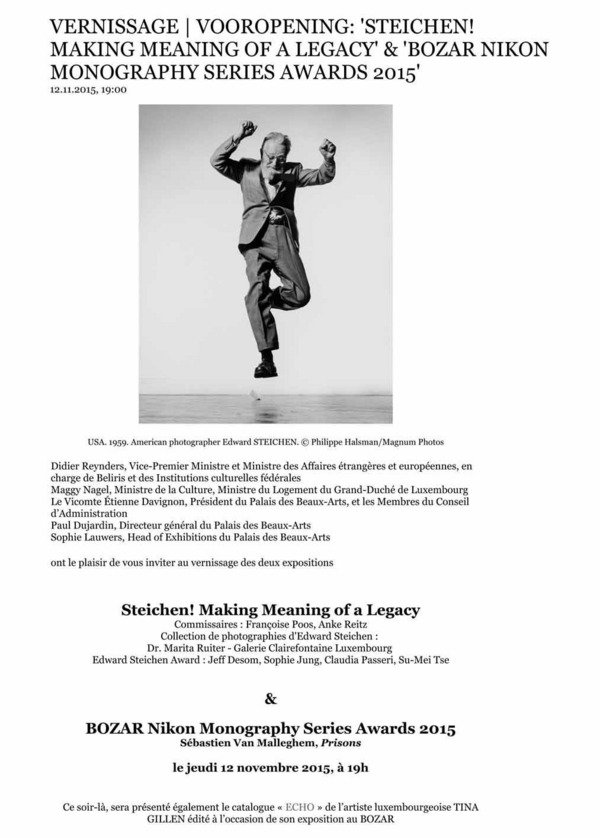 Edward Steichen was born in Luxemburg before moving to New York where he became an internationally renowned photographer, painter, gallery owner and museum curator. Steichen was first and foremost an artist. He didn’t take photos, he composed comic strips. Greta Garbo, Henri Matisse, Auguste Rodin, Marlène Dietrich and Franklin Roosevelt posed for him. BOZAR takes a closer look at his oeuvre and gives the exhibition a contemporary perspective with works by four laureates of the Edward Steichen Award.

Belongs to Focus on Luxembourg
Luxembourgers are real Europeans, and world citizens. They can be found in leading positions in all sectors, and that includes culture. During the Luxembourg Presidency of the Council of the European Union in the second half of 2015 a few prominent Luxembourgers will be present at BOZAR. Artist Tina Gillen will be experimenting with the space made available to her in the Centre for Fine Arts and there will be a multimedia exhibition by winners of the biennial Edward Steichen Award Luxembourg. The Luxembourgian New Yorker was one of the most influential photographers of the twentieth century. And then there’s cinema, theatre and music of course. An overview is available here.