Contemporary Art from the Former Soviet Union and Other Mythical Places. An exhibition of 150 artworks by 75 artists from 14 countries in the former East. It is about how some artists choose to depict the chaos of our times critically, challenging its power through humour, parody and the power of art itself. Part of the Nordwind Festival. 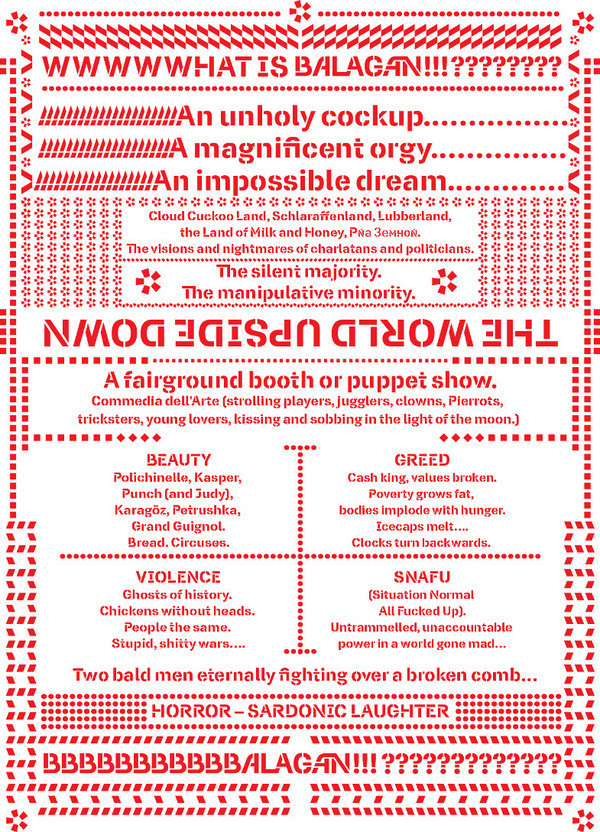 Organized by: MOMENTUM for the NORDWIND Festival 2015

In Russia, BALAGAN!!! is a popular exclamation that describes, with celebratory gusto, a farce, a fine mess, the most unholy of cock-ups—but it is also a major international exhibition of contemporary art from the former USSR and Eastern Bloc that reveals a world in which chaos and misrule, along with the social comedy that results from it, are celebrated and scathingly exposed. Balagan originally meant "fairground." By the 18th century, it had become associated with the activities of the people who worked in them: puppeteers, clowns and jesters, who made fun of and satirised established order. From the beginning, however, artists have realised the potential of balagan as an effective framework for revealing the truth.

Today, the revolutionary politics of laughter, as well as the cathartic release it promises, are engendered by a sense of outrage at cruelty, inhumanity and the abuse of human rights. But balagan is not only modern: ever since time began, chaos has been ever-present. This exhibition is about how some artists choose to depict the chaos of our times critically, challenging its power through humour, parody and the power of art itself.

A 265-page illustrated catalogue, designed by Barnbook, also telling the backstory of BALAGAN!!! in theatre and art, accompanies the exhibition. Details available on the MOMENTUM website momentumworldwide.org

The NORDWIND festival is showing in Berlin new and headstrong performance and dance productions from Iceland, Denmark, Sweden and Norway. In Exodus, Cecile Ullerup Schmidt and Andreas Liebmann sing of their exchange with the "new Europeans" in the Sicilian reception camps. In her techno-driven piece Splendour, Stina Nyberg is looking for a new kind of freedom in the body taking control of the sound. Erna Ómarsdóttir exposes the audience, in her powerful piece Black Marrow, to the primeval energy of the unconditional will to survive.
Russian performance artist Pjotr Pawlenski will present his work and discuss political art in Russia and Germany with Philipp Ruch (Zentrum für politische Schönheit /Center for political beauty) and Fabian Scheidler (“Die Megamaschine”).
www.nordwind-festival.de

In Berlin, the exhibition takes place in 3 venues and is accompanied by a program of Performances and Symposia.